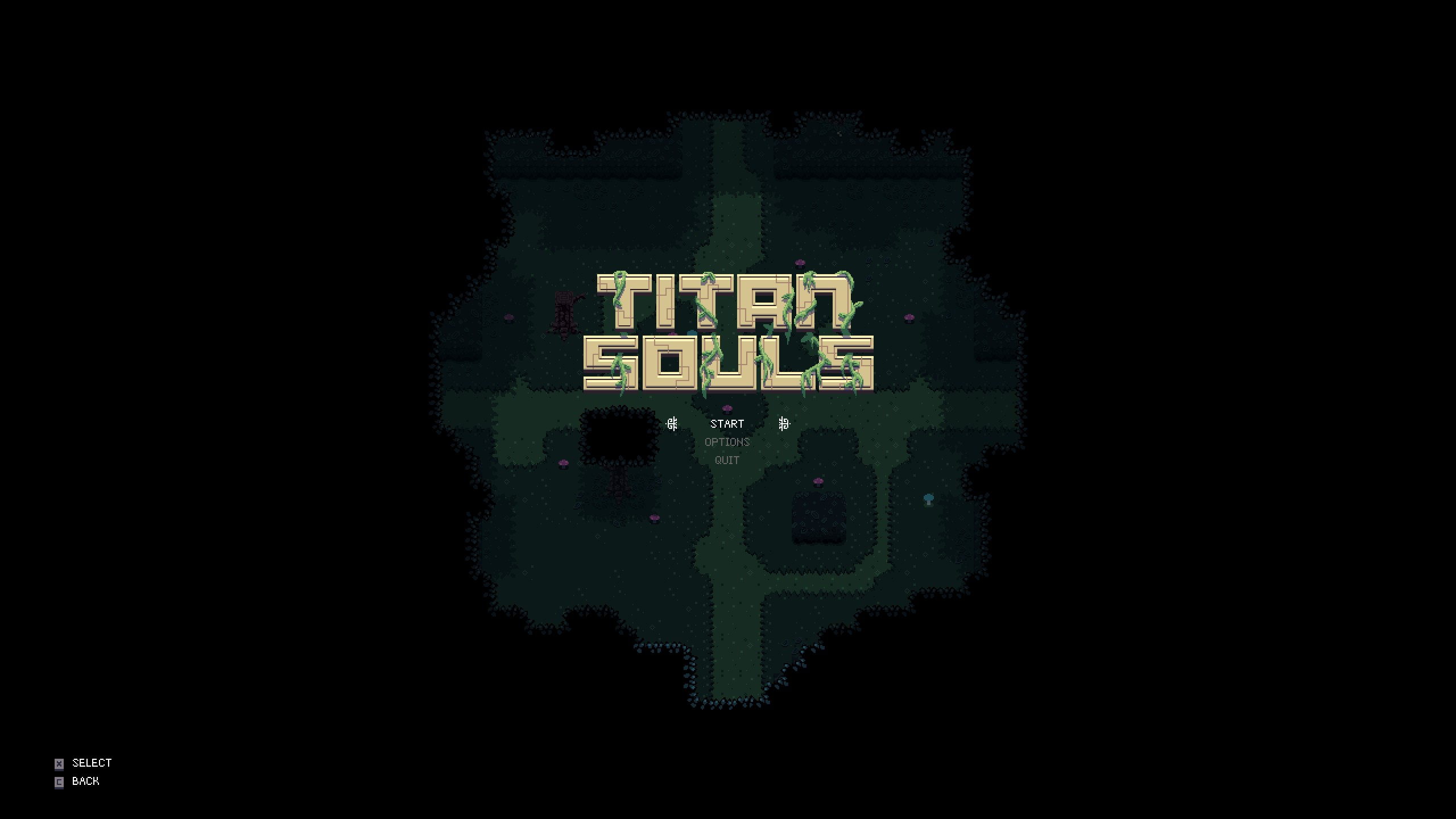 A frustratingly simple game that requires non-linear thinking to win.

Titan Souls is a very simple game that doesn't do much, but what it does do, it does with shining colors.  Other games claim to be simple, as does Titan Souls.  I have found that not many simple games can live up to the simplicity, as some are so simple that they are monotonous and boring while others aren't as simple as they originally claim.  This game is simple, with simple controls and clear goals, and at the same time is extremely difficult.

This game is very easy to learn.  There are 3 controls in this game: movement, rolling/dodge/running, and firing/recalling your one arrow.  While the controls are extremely simple, it is very easy to make minor mistakes.  While being a simple game, any mistakes, minor or major, will get you killed. 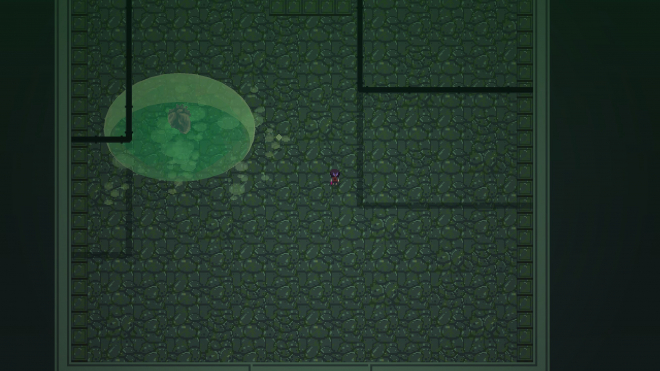 Each titan takes a different method of approach to kill.  For example, the titan above is a slime blob.  Inside the blob is a heart.  The goal is to, you guessed it, pierce the heart with your arrow.  The difficult part of the blob is that once hit with the arrow, it splits into two parts, one with the heart and one without.  By the time you get the heart alone you will have multiple small and faster blobs hunting you down to kill you.  One touch from the blob will kill you.  Good timing, and a good amount of luck, are needed to kill this titan without losing a dozen or two lives.

The titan below is an eye on a cube.  The titan will roll from side to side, trying to crush you underneath it.  Avoid it if you can, but also beware it's eye.  If not hit, the eye will look in a certain direction and fire a wide laser, which will kill you if it hits you.  To kill this titan you need to hit its eye.  It is a challenge that is easier said than done. 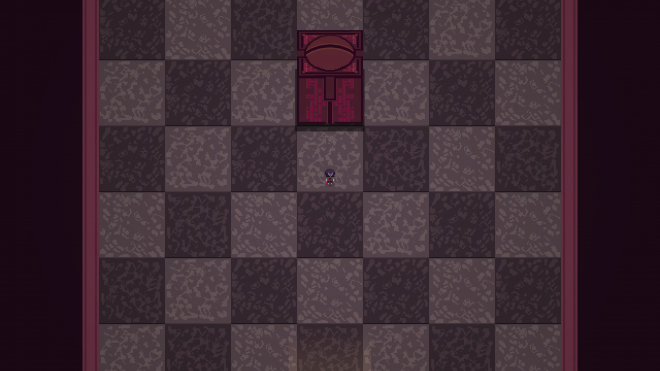 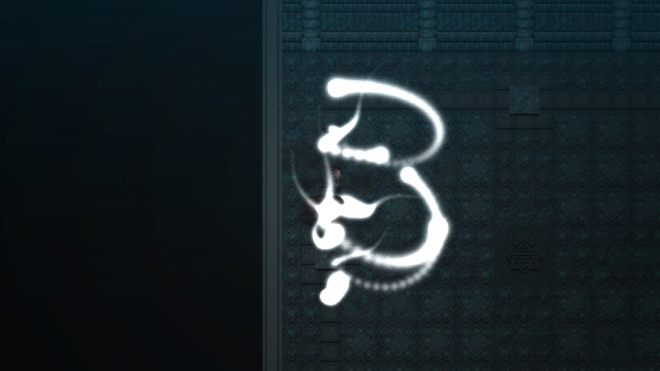 Once you kill a titan you absorb its soul, as shown above.  Upon absorbing enough souls you will open a door.  You must kill all 4 titans in the first area to open up the second area while needing 12 to open the third area, and so forth.  Figuring out how to kill the titan is only part of the challenge, as each one has a different weakness.  The green blob has its heart, the cube has its eye, the old champion becomes vulnerable once you hit him with an arrow, destroying its armor for a short time.  Each titan has its secret, and exposing it is the challenge of the game.

Another challenge of the game is finding each titan.  There are multiple areas in which to explore.  You have to solve a puzzle in order to open up a pathway to one titan, as shown above.  In an ice themed area you must use your arrows to light braziers one at a time.  Upon lighting the last brazier, you have to shoot your arrow through the fire in order to melt a frozen waterfall that is blocking a titan entrance.  Accessing the titan can be part of the fun as the maps are beautiful and cleverly laid out. 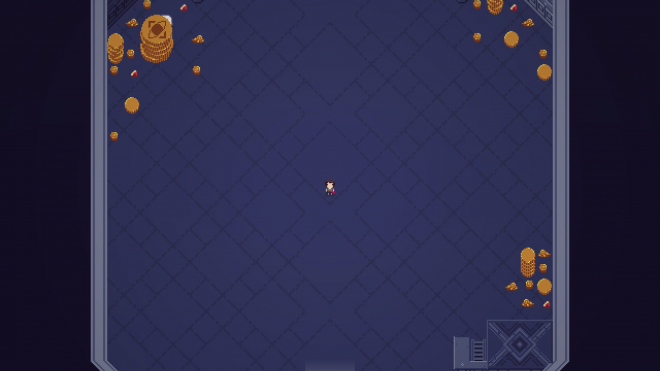 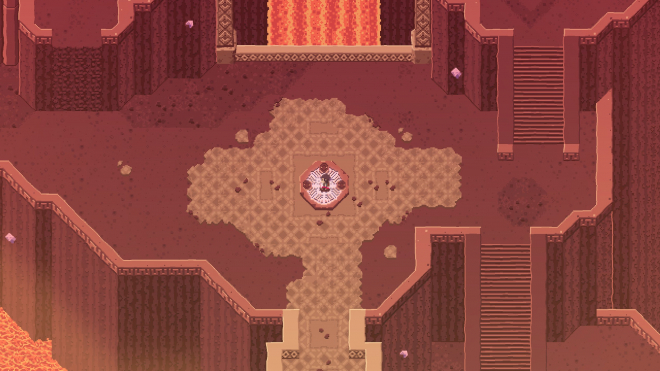 Upon reaching a new area look for a circle with dots surrounding it.  That is your new spawn point.  If killed, you will appear at the last circle you activated.  Unless you're speed-running the game, I suggest you take advantage of the spawn point as you are likely to die many, many, MANY times to the titans as you try to find out their weakness and kill them.  A nice hint that I noticed is that the dots, for which titans you have or haven't killed, point in the general direction of the target.  It may not seem possible to get to that one titan as there is a lava-fall in the way, but don't get discouraged, as there may be an entrance behind the lava-fall.  This game will make you think in different ways in order to reach the titans, and even more ways when you try to kill them. 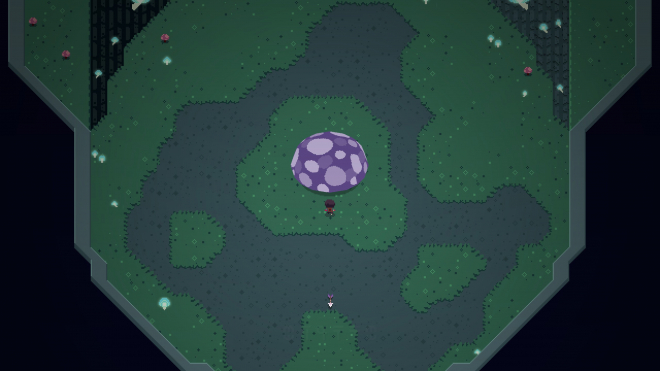 Each boss, as mentioned, will take a different technique to kill.  You may use similar tactics from one on others, but no two titans will die the same way.  Each titan has its unique abilities.  One of the titans is a giant mushroom, as shown above.  It will leave toxic slime that will make everything turn psychedelic colors.  The slime will slow you down and hurt you over time.  It's difficult to avoid and is hard on the eyes when you try to adjust to the bright colors while trying to hit one specific spot with your one arrow.

Another boss is a flower type boss with 4 vines.  It will whip the vines around itself while trying to hit you with them.  You can shoot the thorn vines off, leaving them inert.  Be careful though, as they will still kill you if you hit them, even when detached.  Also, a poisonous purple/black cloud will follow you around.  If you stay in the cloud too long it will kill you.  You must hit a specific point of the flower at a certain point to get it to open up, then you have to shoot your arrow into the inner "heart" of the flower to kill it.  If you're not fast enough the flower will close the petals, and you're back to square one.  And oh, did I mention that it is all rotating and can change the direction it's spinning at any moment? 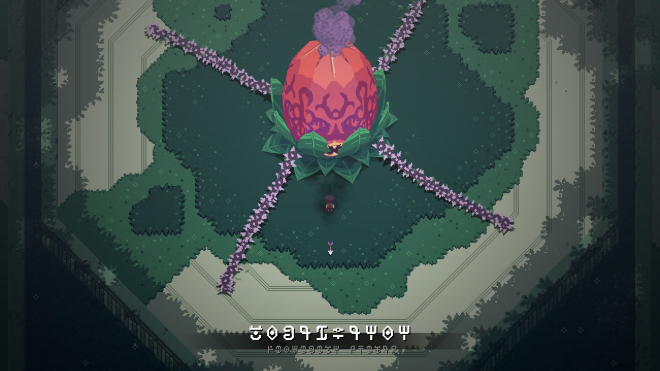 Titan Souls is not a game for the faint of heart, nor for the easily enraged.  This game will kill you dozens of times in very few moments.  A single mis-click will leave you in a bloody mess on the floor.  Many bosses killed me dozens of times before I was able to score the lucky shot to kill it. The euphoria you feel after killing a titan that had mangled you time and time again is an intensely great feeling that is paralleled by the overwhelming rage at being murdered yet again by the titan because your arrow didn't recall fast enough.  If you like strategy games, this is may be a good game for you if you are patient enough to try to kill the same creature for the 20th time.  Oh, and walkthroughs don't really help much more than getting you to the beast and knowing how to kill it.  Actually killing it is a LOT more difficult than it looks.  So take a deep breath, relax, and prepare to get mangled time and time again as you try to kill the titans.

TL/DR: Titan Souls is a great game for those who are patient enough to be repeatedly murdered by giant monsters.  It would be a decent game to get on sale.  So give it a shot!  Oh, and don't forget to breathe!

The music is very atmospheric. It sets the tone for fights, as well as increase the elation of victory for finally killing a titan you've spent dozens of lives fighting.

The controls are simple, being move, roll/run, and fire/recall arrow. With that said it's very easy to make major deadly mistakes.

The game play is fun but frustrating. Once you figure out how to beat a boss it's a matter of skill or luck (or both) to win in the end.

Once you've beaten the game it's only worth looking back to beat it faster or with less deaths.