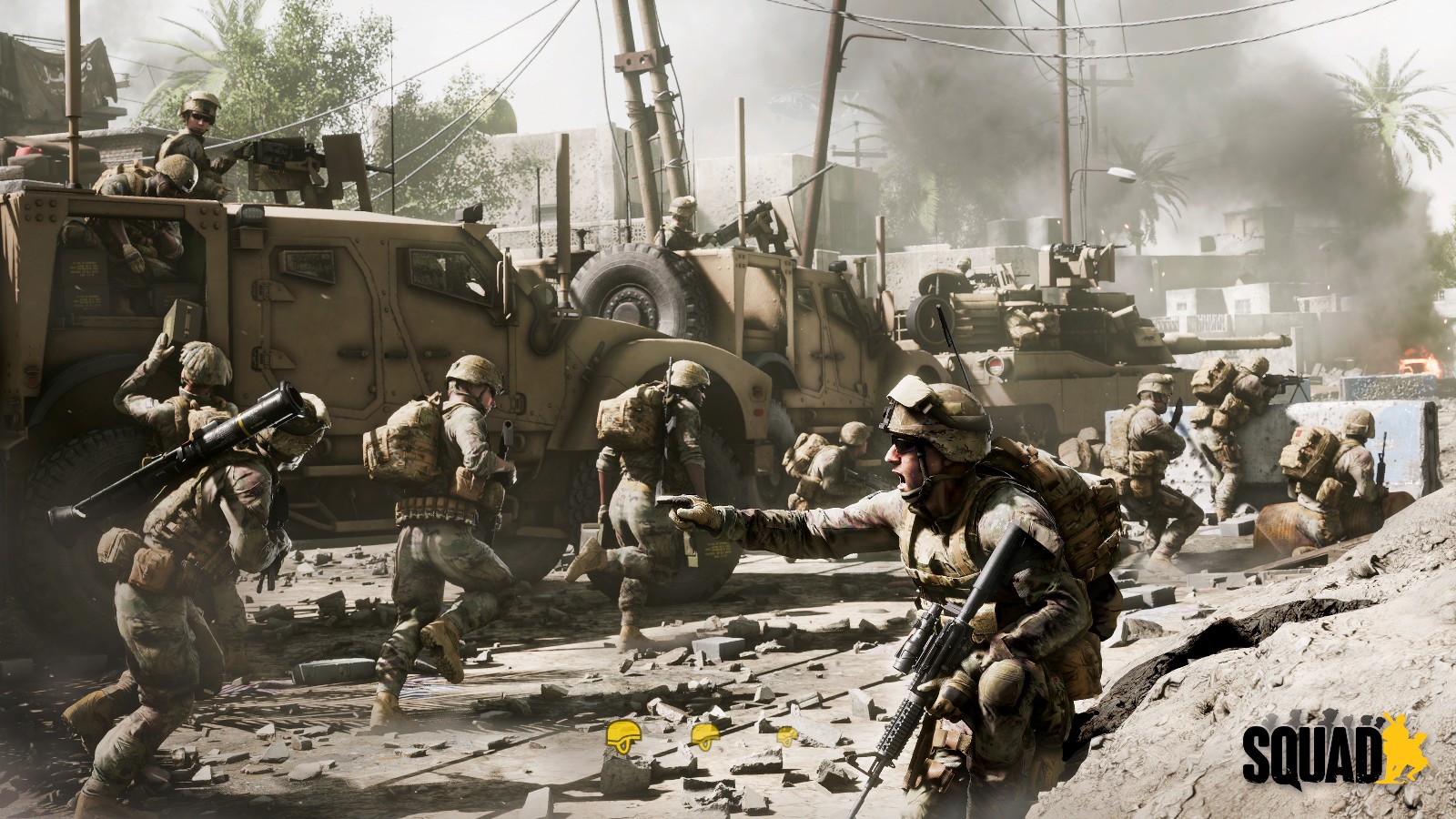 In a world where first person shooters are everywhere, including a team vs team, this one stands out from the rest.  In other games there are leveling up perks so the more you play the better gear you have, the better skins you have, and so on, but this game puts everyone on equal ground.  This game strives to equalize everyone and leave the game to pure skill with a sprinkle of luck.  The only way you could have an edge on other players is to cheat or have a nicer computer to have better graphic settings.

You start the game by doing training.  The training is a pseudo boot camp to show the basic controls and mechanics of the game.  You can redo the training at any time.  From there there is a single training map that will allow you to see how the game works and how roles work.  You can try all the different guns, vehicles, and armaments.  If you can play with others, you can try out flying others around, building encampments, and running drills.  It's a good way to get a hold of how the game works.  You don't have to worry about running out of time, materials, or lives. 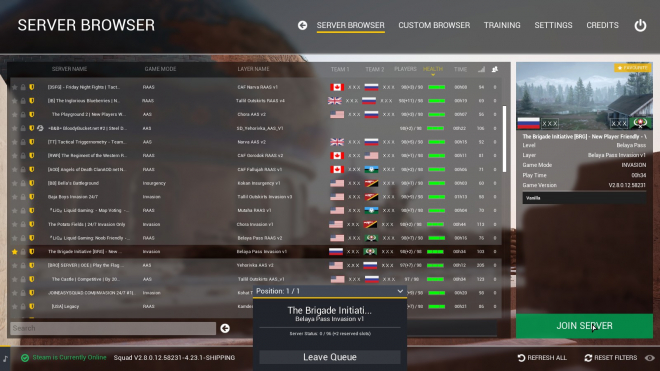 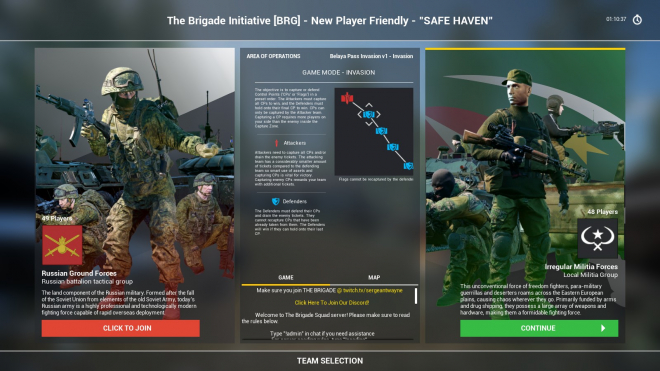 Once you select and load into a server you can choose which side you will want to fight for.  There are some factions that will have bonuses, but they all equal out in the end.  The game focus's on fairness more than anything.  Once you select the side you will need to either create a squad or join one.  Once you have selected a squad you will select the role you want or that the squad will need you to fill.  You have different levels of communication.  If you are a regular soldier, you can talk to your squad regardless of where you are on the map, as well as to anyone around you.  The local chat is good if you're fighting with or talking with other members of your army that aren't on your squad.  It's especially helpful with certain roles like medic or driver, where you are working directly with everyone around you.  If you happen to be a leadership role you will have an extra channel, which is the leadership chat.  That is where the commanders and squad leaders can coordinate tactics, resupplies, maneuvers, and so forth.

Roles will greatly determine what gear you will have.  A medic can have a rifle with a healers kit and extra wound patches while the Light Anti Tank role will have explosives to destroy vehicles.  Engineers will be able to put down barbed wire and sandbags and other defenses like that, as well as being able to construct and destroy stuff faster.  Squad leaders can put down rally points, where members of the squad can respawn if they die.  Try to play to your skill set while also keeping in mind that there are limited roles available for each squad, while some roles aren't available until the squad has a certain number of members.  Work with your team to fill out the what they're needing or missing.  If you don't like your squad you can always jump to another or create your own. 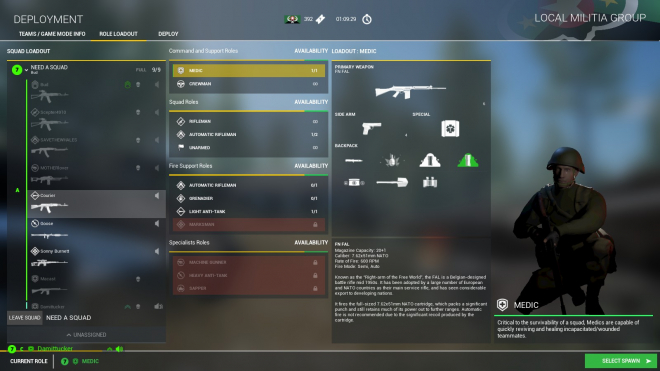 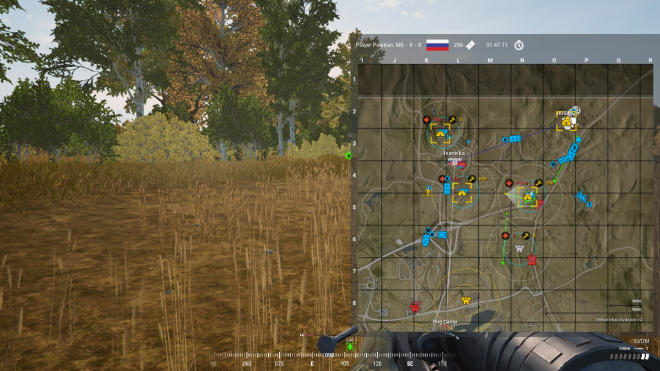 Once you're in game you have a couple different ways to navigate. There is a small map you can pull up and a larger and more interactable map.  The squad leaders or fire team leads can mark points of interest, including rally points, directions of combat, or enemy combatants.  It's broken down into coordinates within a map so your leaders can coordinate movements and such.  Different groups will use the map more or less, so you'll need to get familiar with how they use it in order to be the most effective.

Once you're in the game and in your squad, you'll need to talk to and work with your teammates.  In other games you can potentially work alone to kill other players or accomplish the goals.  This game relies heavily on teamwork and communication.  It's nearly impossible to play a game without some way to talk to your team.  Squad uses an amazing dynamic sound system, where you can talk to the squad on one channel regardless of where you are on the map.  Or you can talk to those around you, regardless of team.  Or you can talk to command, with all the squad leaders and commanders together so they can coordinate the campaign. 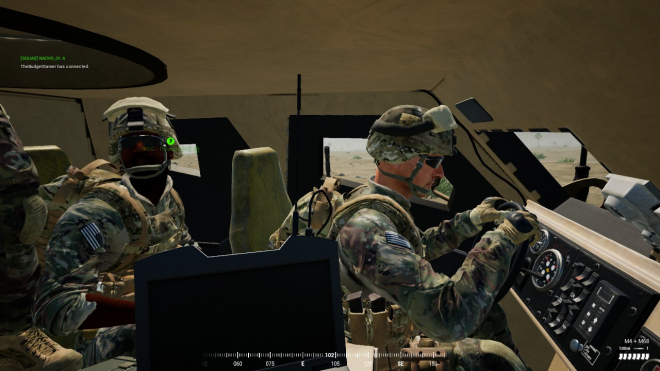 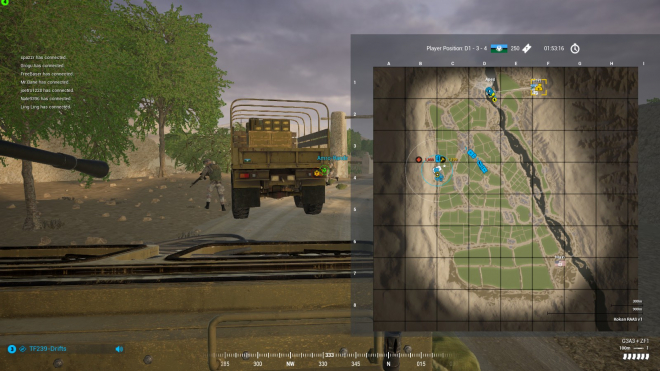 Once you're in a team, you'll need to work together with your team to accomplish the goals.  Some squads will work to be on the front line, so they'll need to catch a ride to wherever the fighting is located.  Some squads will be transporting the gear and supplies, so they'll be running back and forth to wherever needs it most.  Some will scout or help push from one area to another.  And once they're in a good spot the squad leaders will put down FOB's, or Forward Operating Bases.  They'll allow anyone on the team to respawn at that location, as long as it's still standing.  It's a good idea to find the enemy FOB's and destroy them so the enemy doesn't get reinforcements.  You'll also need to protect your own.  Work with your team to decide where you're needed most.

Once you're in combat, you'll need to work together with your team.  Many times you'll be working with people not in your squad so you'll need to use the local chat.  Also be careful, as the friendly units don't always show up with name plates above their heads, especially when they're far away.  Keep track of your map, where the movements of your team are shown, so you don't accidentally kill your teammates.

Battle is tough.  You can sometimes spend a good amount of time traveling from one zone to another, pushing forward on a flank or going to support another squad.  You have limited stamina, so make sure you're watching the gauge if you want to be moving fast.  Talk to your team to make sure you're covered before moving too aggressively, as they might not be able to support you if you move to far forward or if you push into a compromising position.  One wrong move might give away your tactic to the enemy forces and make your fight that much harder. 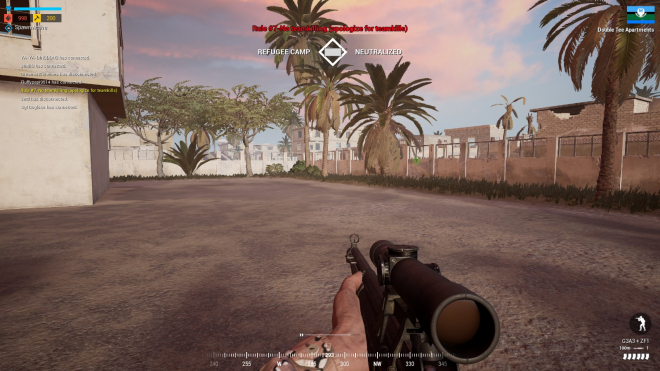 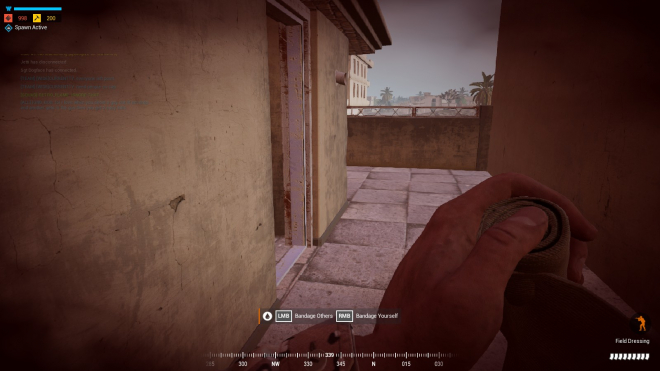 As mentioned before, there are many different classes you can play as, depending on your squad size.  I tended to play more toward the medic side, and it was stressful.  Medics are always in short supply, as they are one of the roles that directly influence the support of the team as a whole.  Each soldier is equipped with a few bandages that will stop serious injuries, but it's the medics that will come in and heal the team to full.  Supporting the medics is important, as they will keep the team alive.  Or do your best to kill the medics on the other side so they can't survive as well, if you can.  Like in real combat you'll need to think in the larger picture as to what you'll need to do to be victorious.

At the end of the round you'll either be victorious or be defeated.  The teams will then move toward the next map and you can choose sides again, rebuilding the squads and trying to be the victors.  Not everyone will continue on to the next round, and the teams may shuffle so that you may not be working with the same people you were in the last map.  This game really emphasizes communication and teamwork so that you can be successful regardless of who you work with. 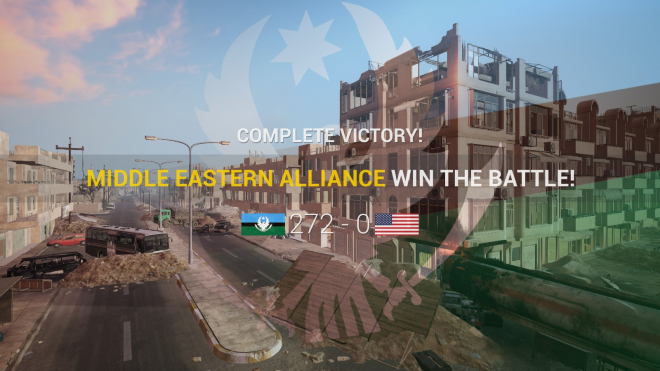 In the end this game is an amazing and hyper realistic game.  You have to work with others to win the rounds or even survive.  Each round is unique from the last as you work with different people to accomplish different goals.  There are many servers that are new player friendly where the more advanced players will help newer players learn the ropes.  The training area is a good way to learn the basics, but there's so much more to learn once you're in game.  The only issues I had with this game is that not everyone is forgiving of newer players or of accidents that you could make, so you'll need to be careful or you'll need to find a new server to play on.  It has a pretty large learning curve as well, so don't expect to completely master the game right off the bat.  One great part of the game is that everyone is on the same playing field, as you get the same gear whether you have 5 hours in game or 500 hours in game.

I would say that overall this game is worth it's cost.  If you like realistic team based combat games, along the lines of Warzone or Call of Duty, this game may be the next game you'll love.  It goes out of it's way to be as realistic as it can, with some exceptions as you'll see some glitches from time to time.  The game is a monster when it comes to requirements, so don't expect to have a good time if you're on a medium tier or lower computer.  Practice makes proficient and when you lose one game, move on to the next and apply what you learned to win the next time.  Whether full price or on sale, this is a must have for any FPS / combat game lover.

Super realistic, down to how much ammo used in the magazine. If you reload without emptying the mag you'll keep the half used one in your inventory.

The sound is well done. It's three dimensional and distance based, so you can tell how close or far away someone is by how loud they are, depending on the voice channel they're on.

This game can be played on lower end machines, but to get the most bang for your buck you'll need a higher end computer to run on full graphics.

This game can be as easy or as difficult as you want it to be, depending on the server you connect to. There are professional grade servers where gameplay is unforgiving to new players while there are new player friendly servers where they'll teach you how to play.