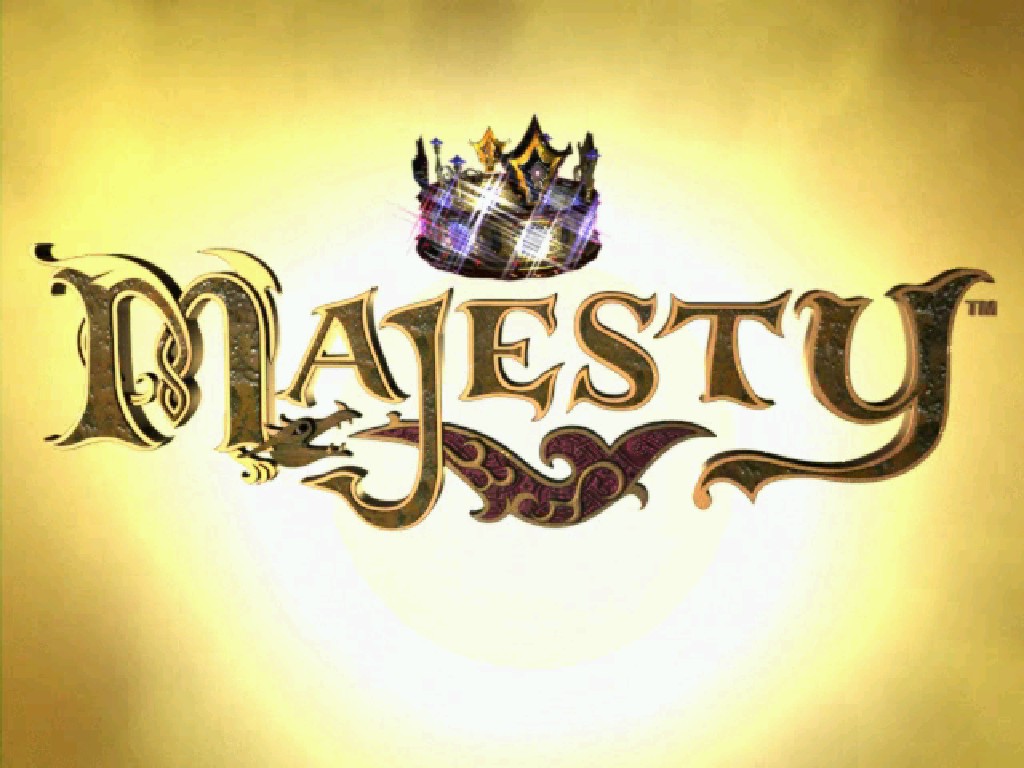 A fun real time strategy game where you don't control your units.

Majesty is a fantasy kingdom management simulator game.  It's a nice mix of strategy and kingdom building.  It's as simple as the player wants it to be with the easy levels, but can scale to be intensely difficult on the expert levels.  It's a great game where every level is unique as to the location of the main kingdom as well as the enemies.  This game also allows for different play styles so that the player doesn't feel forced into one way of playing or beating the game.

When you start the game you will have most of the levels available to play, ranging from beginner to expert difficulties.    Many levels aren't playable until you've beaten other levels, as a precursor to needing to play and learn how to play the game.  As a new player it is highly suggested that you play the beginning levels, as they are pseudo - training levels to show you how to play and how many of the mechanics work.  The beginning levels are extremely forgiving, as you can make major mistakes and still survive.  In the later levels a simple mistake can mean losing a lot of work on that one map.  Another point that drew me to this game was that the early levels don't take themselves too seriously.  The voice lines of the characters adds a lot of humor to the game.  In one mission you have to help remove a curse of stupidity from your subjects, as an angry wizard cursed the kingdom with idiocy.  The game is difficult at times and the humor does a lot to lighten the mood.  I found that the death dialogue was some of my favorite, to be honest. 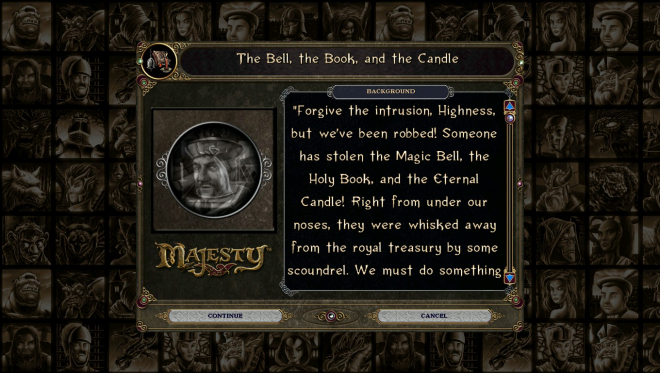 As you select a mission it will take you to the mission briefing.  After selecting the mission but before the briefing details there is a short announcement from the royal herald that will give a little backstory as to what is happening.  For example it is here that you would find out that your subjects have irritated the local wizard so the kingdom has been cursed.  Or that a local prince has been captured and you have been asked to save him.  Or that you have been asked to rescue heroes from another kingdom who have been captured as slaves, destroy the slave pits, and kill a powerful creature.  The backstory isn't necessary to understand what to do or how to win, but it adds a certain depth to the game that may help break up any monotony from managing your kingdom.

The briefing will give the player the game rules that they will have to follow or complete in order to complete the mission.  These rules can include restrictions to hero guild buildings (not being able to build some) or that wizards aren't available to be built or trained on the map.  Some tasks can include killing all enemies, rescuing a certain character, killing all enemies within a time period, or earning a certain amount within a certain time frame.  The mission briefing will give you all the details you need in order to play the level.  The tasks or requirements that you need to complete the mission are also available from the system screen within the game, so if you miss something it'll be there even after the map has started. 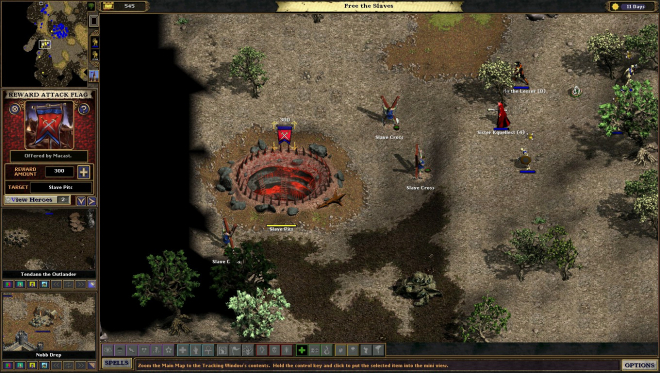 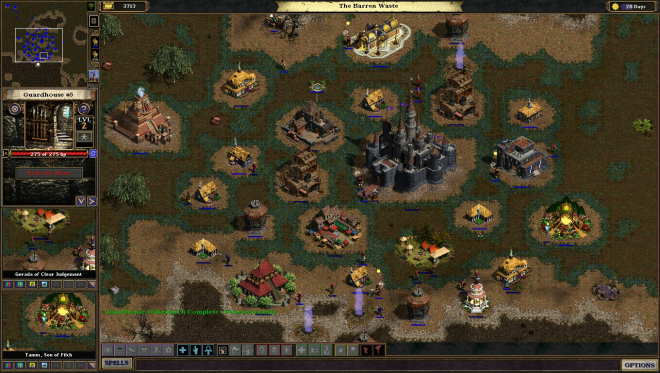 Once you get into the mission the fun starts.  Here is where you will start to build your kingdom.  Unlike Age of Empires or Starcraft or games of that sort here you only build the buildings, select the upgrades, and train the heroes.  You have no control as to where your heroes go or what they do.  Many times I found myself almost pulling my hair out as my heroes did something stupid and got themselves killed.  Knowing how to manage your heroes can go a long way, even if you can't directly control them.  Above you can see what it looks like when a kingdom is being fleshed out.  You can choose how far away the buildings are built from each other, so as to allow for easier movement for the heroes, tax collectors, and guards.  I found that if the buildings are built too close together it can hamper movement which can mean dead characters.  Below you can see how you can place the buildings.  If it's too close the circle will be red, but if it's good to place it'll be green, as shown. 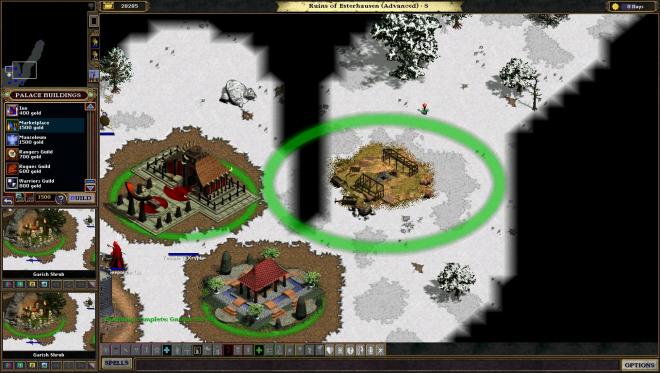 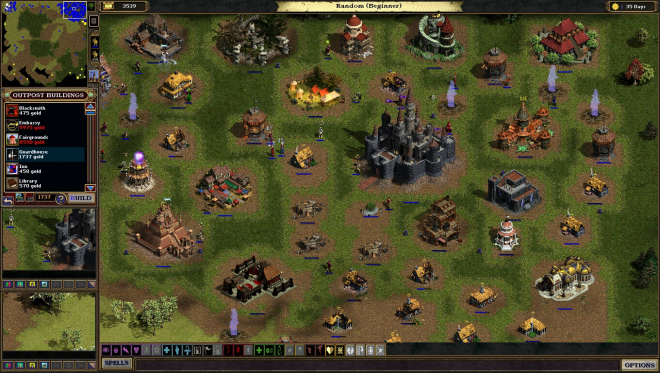 As you expand your kingdom and build new buildings the game will automatically add certain buildings to your kingdom.  It will add houses for your peasants / builders, fountains, gazebos, graveyards, and so forth.  It will also add sewers, broken pipes, and such from which enemies will spawn.  It's irritating to have a well built city, with no room for anything else, and have a sewer spawn where there aren't any guards to easily protect.  As mentioned before, it's worth leaving a little free room every so often so that you could build a guard house if need be.

Expanding your kingdom means more than just training heroes and killing monsters.  You can also build places like the marketplace and blacksmith, which are businesses which the heroes can use to get gear to help with their survival.  Certain buildings, like the library, will become available only after you build certain buildings, like the wizard tower.  Normally, buildings that are available after adding a certain building are meant to help with that building.  Other buildings, such as the temples, are only available in certain configurations, meaning that if you choose one it may be the only temple you can build or that it has a pair that goes with it, and all other choices aren't available (without cheating).  Normally the temples work well with each other.  Also, after you build certain buildings, like the temples, it will add other options for certain other guilds.  The warrior guild can also build paladins or berserkers, depending on which temple you chose to build.

After a certain point you can upgrade your castle, which gives you additional buildings you can build.  Eventually you could build places to bury dead heroes, which allows you to resurrect them for a cost.  Another place trains your heroes without them having to go kill monsters or explore the map.  If you want to add additional buildings of the same type they tend to be more expensive, so it's a little more wise to have a wide array of buildings initially, and build any additional buildings that you want or need later when you're more advanced and have more money. 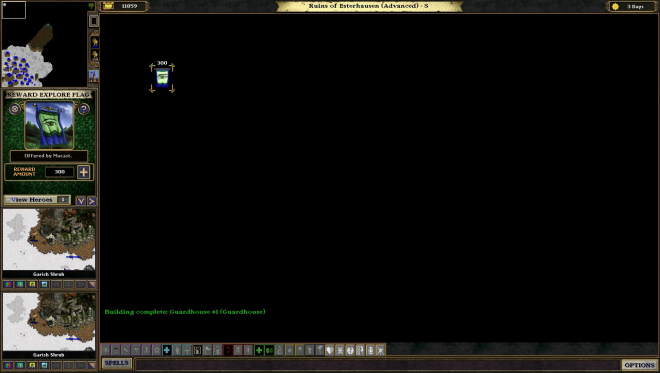 As mentioned above, you are not able to directly control your units / heroes.  Many times you will watch low level, weak heroes walk up to powerful enemies and die in a single blow, wasting the time and resources that you used to train them.  It can be infuriating when your heroes don't do what you want them to do.  But you can influence them to a degree with bounties.  A bounty is an amount of money that you put forth in order to have your heroes do something, whether it is kill a monster, destroy a building, or explore a certain part of the map / go to a certain location.  If you're being attacked by a powerful monster you can add a very high value bounty on their head.  I found that the higher the amount the more likely I was to get more heroes to go after the bounty.  Certain types of heroes tend to favor certain bounties, such as warriors favoring killing monsters or rangers favoring exploring.  Rogues favor anything that will bring them money, so if you have a lot of rogues and need something done don't hesitate to use bounties to accomplish the task. 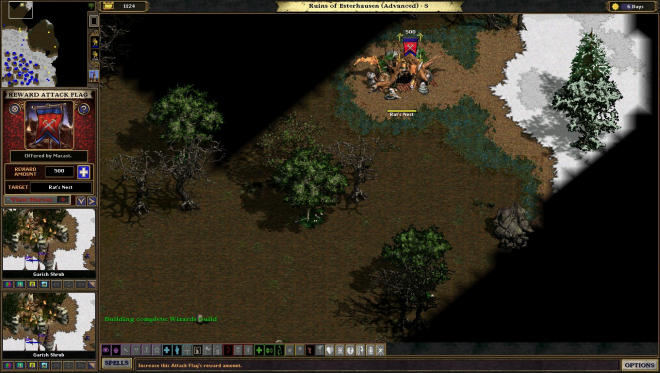 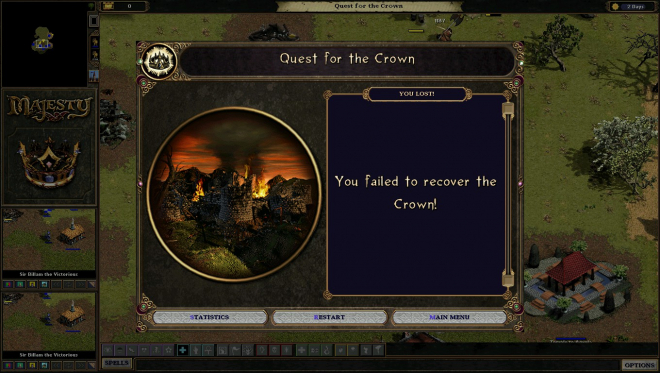 From there the only thing to worry about is failure or success.  As seen above, when you fail you have the option to play again or go back or load, while if you win, as shown below, you can continue on the same map.  If you've beaten the map and want to play with something, build new buildings, or cheat, continuing after you've succeeded in the mission is a good way to play without having to start over on a custom map.  If you fail it explains why you failed and re-states the objectives of the mission.  If you happen to win the herald (normally the same one that gave you the story at the beginning) will explain the repercussions of what happened after you win.  I found the mission completion dialogue after completing the mission with the curse of stupidity (as mentioned above) was amazing.  If you're looking for a humorous and clever ending to a mission, complete that mission. 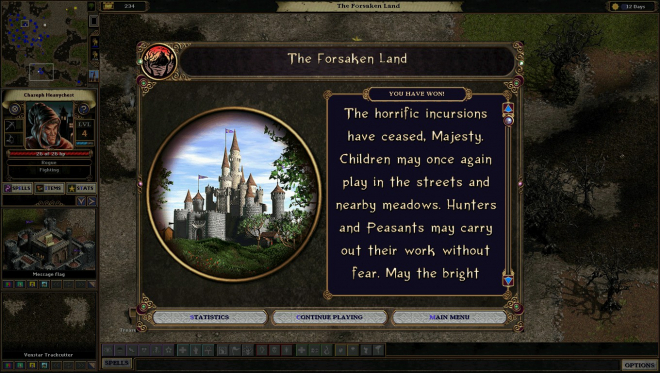 This game was a favorite of mine growing up and is still a favorite to play even all these years later.  Majesty is a great game that challenges your skills and patience.  There is a huge luck factor with this game though.  Each time you start a map everything is randomly set.  One map you can be in the very center while another time you're in a bottom or top corner.  Each individual play through of each map has it's unique struggles that you have to work through.  It's never the same game, even if you've played the same level multiple times.  You also have to work through the issue with the independently acting heroes, as they can easily get themselves killed.  When you play, work your way up through the difficulties as the game trains and challenges your skill and resolve.  It's really easy to get angry at the game, but it's hard to just walk away once you've started a level.

This game is one that you won't regret purchasing and playing.  It's not beautiful like many current games, but it's a great game for it's time.  It's a good challenge that rewards thinking outside of the box.  If this game is on sale I would highly suggest getting it.  Majesty may not be your first choice of games, but it's one you'll be happy you purchased and played.

The gameplay is fun but pretty unforgiving. It is a diverse game that caters to many different play styles but it is really easy to make fatal mistakes.

The AI that controls your heros is pretty unintelligent. Heroes will make mistakes and be killed very often. It feels like the enemy AI is more intelligent than the player AI.

The music is fun! It adds to the high fantasy atmosphere without being too obtrusive or annoying.

There are many different difficulties, depending on the map. The game builds your skills as you play from the beginner to the more advanced maps, building understanding on how to play as you progress.

Each map is randomly generated when it starts. I started in the middle of the map one time, the corner the next play through, and in the center left on the third play through. No two maps are exactly alike.