A hacking game that's as realistic as it gets.

Hacknet is a fun game that has a hidden educational value.  I myself have had a number of years of programming experience, and found that this game used familiar commands.  Other games that have included a hacking / programming aspect tend to re-skin it as a different activity, like a puzzle or matching game.  Very few games focus on being realistic when it comes to computer systems.  Hacknet is a game that worked toward realism. 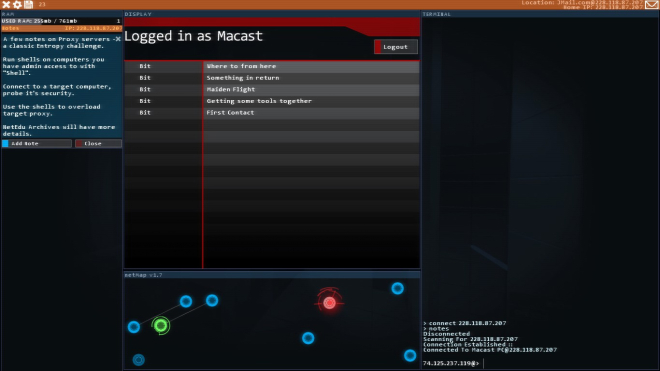 When the game starts you get an email from a random person, instructing you about something that happened.  This unknown character then asks for your help.  They send you an IP address for a system that you need to hack, along with instructions as to what exactly to do.  If you're not familiar with how computer systems work it is easy to get lost in what you're needing to do.  The email gives you hints as to what commands you need to know for the current task.  You can only have a certain number of hints open at one time, though, as there is a limited amount of power on the CPU. 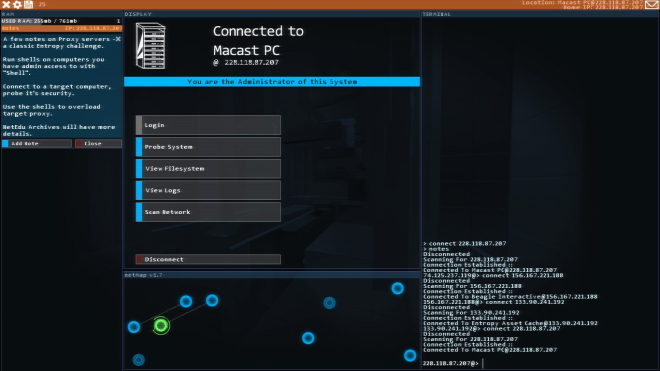 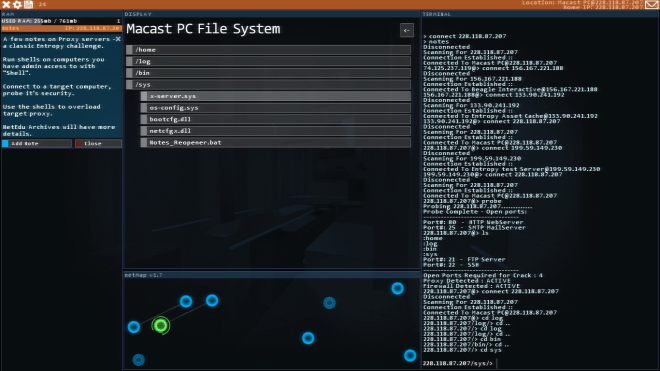 As shown below there are different levels of security on different computers.  The first few computers that you hack have limited defenses so it is very simple to hack.  Later systems have more advanced security, which requires more clever tactics to break in.  You can use certain tactics, like creating shell systems on already hacked computers to overwhelm the security of the system you're hacking.  From there, you can hack the system to allow you in.  But be careful, as many of the systems that you're hacking have a timer.  For fun I allowed the timer to run out to see what happens.  There is a system that feeds back to your computer and forces it to shut off, ending all the session and losing all progress you've made.  From there you have to restart the challenge from where it was last saved. 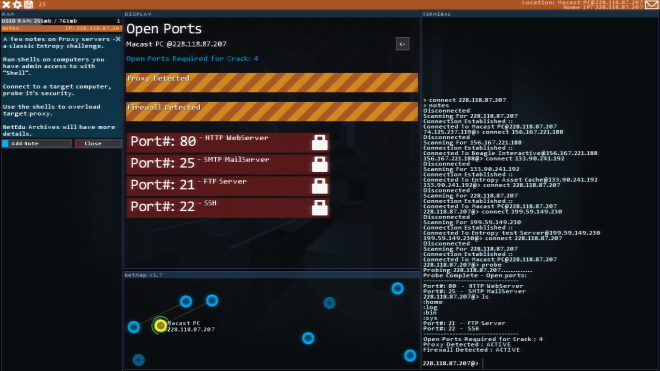 As you get into the game later the email that has been teaching you how to play and what to do hooks you into a library system (shown below), which gives more information as to how to play.  Using this and the skills that you learned from the earlier tasks you continue to hack from computer to computer until the end.

One of the interesting aspects of the game is that the skills you learn early on are used more and more as you continue through the game.  The more you play the more you hone your skills, becoming faster to identify what you need to do, as well as perfecting the key-strokes and shortcuts to get your work done.  I know someone that is in Information Security and Information Technology, and they told me that this game uses actual hacking commands.  So as you play this game you are learning about how to use your own computer, and maybe even how to hack or prevent hacking. 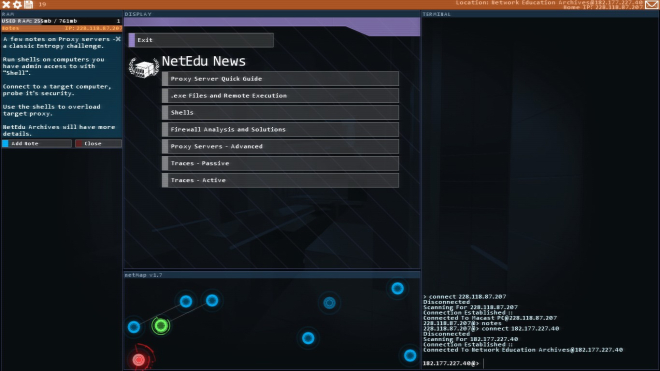 Overall I think this is an OK game.  If you make a mistake and, say, delete a file that you were supposed to copy there's no way to undo what you did.  Mind you, I understand that in real life that is the way it is.  If you make a mistake it can be very costly.  I just wish that there were checkpoints where you could restart the game at the current mission so that you can undo a single mistake.  Early on I made the mistake of deleting something before copying it and I had to restart the entire game before I could do anything.  I like the realism, but I would also like a little forgiveness for minor mistakes.

TL/DR: It's an ok game to get on sale if you like computer systems that is a single play game only.

The music is there, but it's extremely forgettable.

Game-play is fun if you have experience with computer systems or something similar.

If you make any mistakes you have to restart the entire game. Yes it's realistic, but it makes for frustrating game-play.

The story is kind of shallow. It makes for a valid reason to have the players do what they do, but it feels a little forced.

Once you've done something once there's no reason to do it again. The game is the same for every play-through.