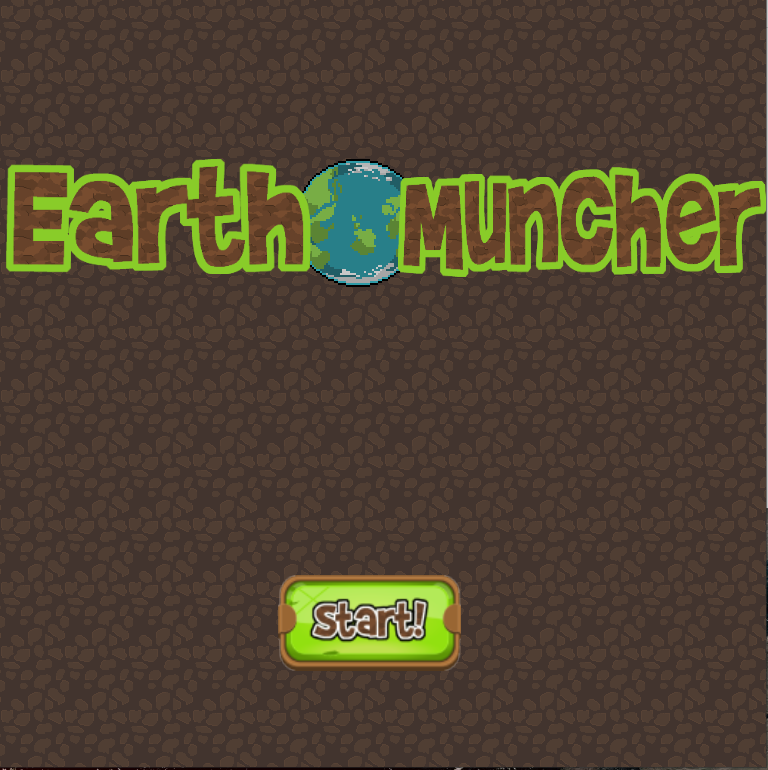 A casual puzzle and strategy game

Earth Muncher is a very simple puzzle or strategy game.  You move through 100 levels eating every valuable thing you can get your mouth on.  But be careful, there are enemies out there that will try to bind you and kill you and eat you.

You start out as all puzzle games in this genre do, in a simple map with no enemies, lots of movement, and a straight line to finish the objective.  Each level will tell you what items you need to eat before you finish the level if you want to complete it with all 3 stars.  It's easy to see everything that you need to eat, as it looks different from the dirt.  But be careful, moving through anything but open paths will use up your movement, even eating dirt.  You will lose if you eat too much, so the game is about eating the goal items and leaving without stuffing yourself too much. 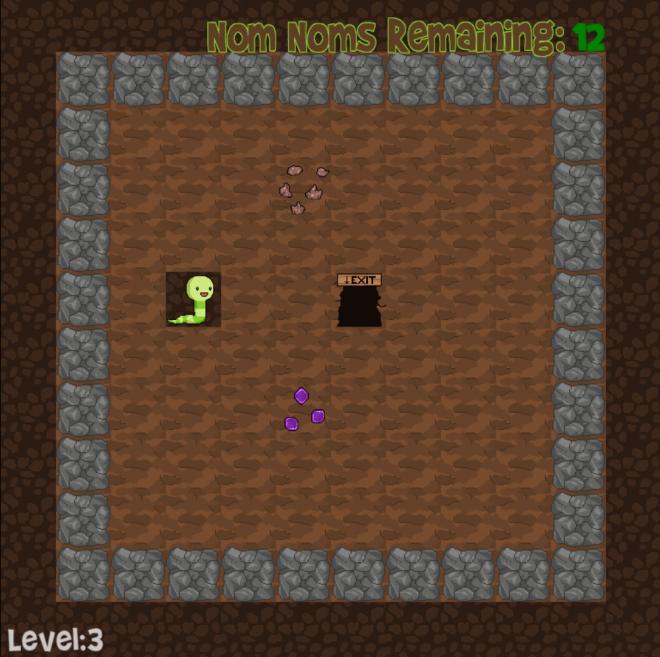 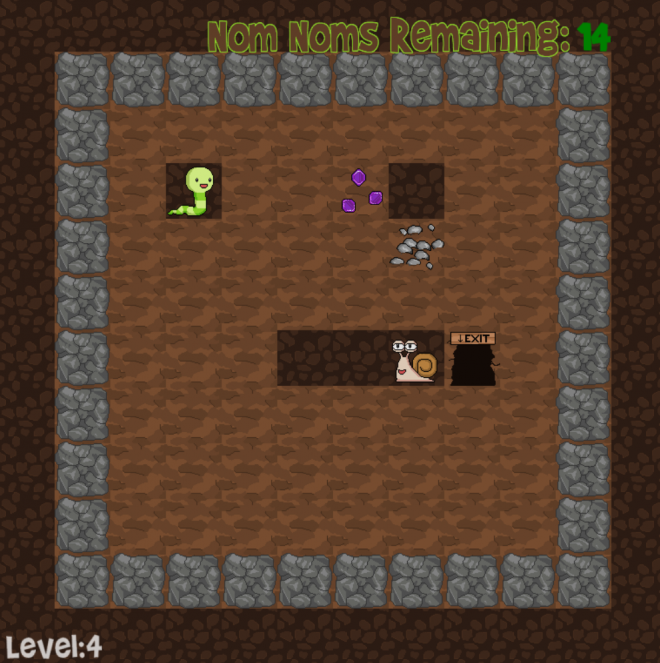 Eating too much dirt isn't the only thing that's a threat.  You can also die if you get eaten by enemies.  Early enemies have slugs and mice, while later levels have spiders that will web you down (using your movement), mice, and moles that will dig through dirt to eat the valuables you're trying to eat.  The early enemies are really simple to route, but the more complex enemies will take planning to either kill or avoid.

Different enemies have different abilities and challenges.  With the slugs, they're pretty simple so if they chase you down a path (they don't eat dirt) it's mostly just chance.  The next enemies that you meet are the mice.  They can hear you through one tile of dirt and will dig through one block to come after you.  They move fast so try to avoid them if you can.  If they eat you, just try again.  Sometimes you can move faster than they do if you're trying to get past them.  There are more, as mentioned above, but go ahead and see them for yourself. 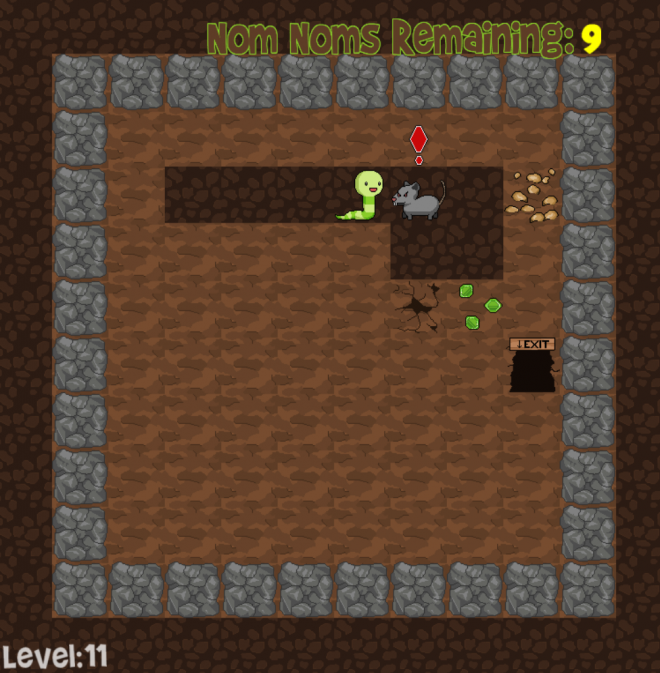 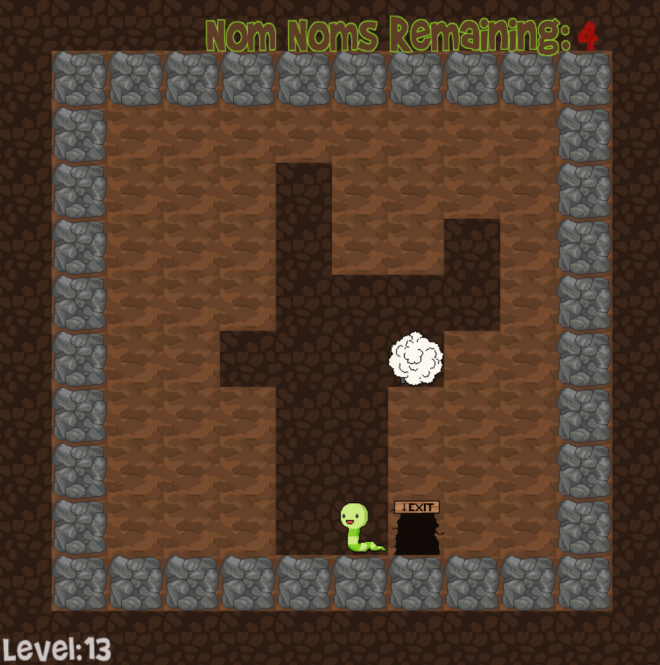 The nice thing about the enemies is that they can, and often do, kill each other.  Mice will kill slugs or other mice.  When there are too many enemies to try and avoid you can wait and sometimes they'll take care of themselves.  Most of the time it'll be pure luck or random chance, so replaying levels may be worth it when you're trying to get everything you need to 3 star the level.

Later on you'll see additional challenges along with the enemies.  The main things that you'll avoid are the mines.  As soon as you get within their radius they'll start a countdown then explode.  Sometimes it's worth it, as they'll kill mice and slugs.  Other times, if you're not fast enough, they'll destroy the valuables you're trying to eat.  Again, sometimes it's worth it to replay levels to get another view with a better understanding of the challenge. 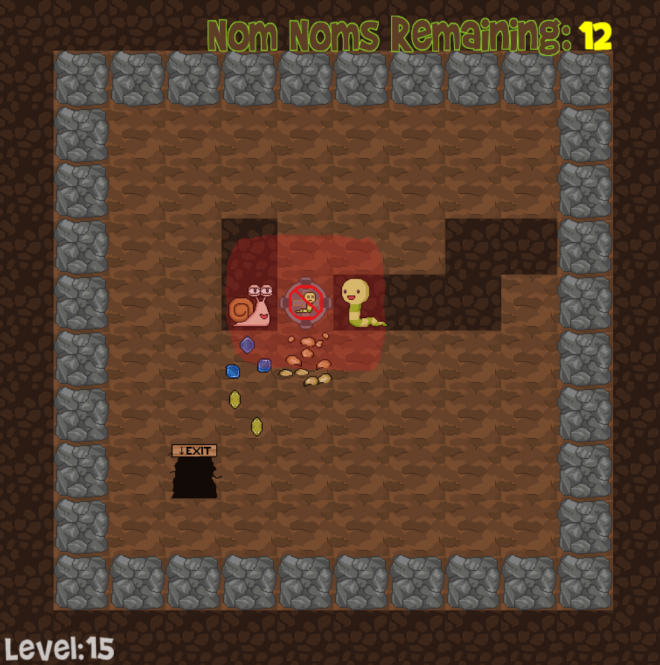 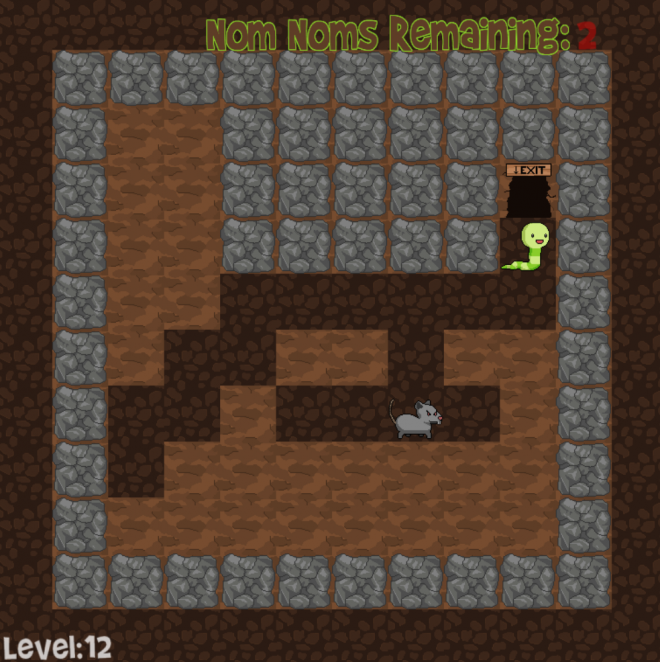 One of the biggest challenges in the game is pathing.  You can choose your path depending on how many moves you have, what enemies are in your way, and where the valuables are that you need to eat.  Some levels give you exactly the number of steps that you need in order to finish the levels, other levels give you copious amounts of movement so you can do basically anything you want.  Replaying levels is worth it as you can build out the paths that you need to take, especially when you need to manipulate where enemies go.  Pathing also matters with where enemies are and where they are going to go, since you can use their movement to your advantage.  It doesn't take long to learn the pathing so it's worth it to watch and let the enemies wander the first few levels you see them.

At times you'll see interesting levels.  Some will be more challenging where you will have to take a lot of time figuring out where to go when so you can avoid enemies while keeping your moves under control, while others are fun as you can wander and do whatever you want.  Once level has you basically explode all the enemies right away, opening up the map to take your time to clear everything out.  They are a nice break from the normal challenge. 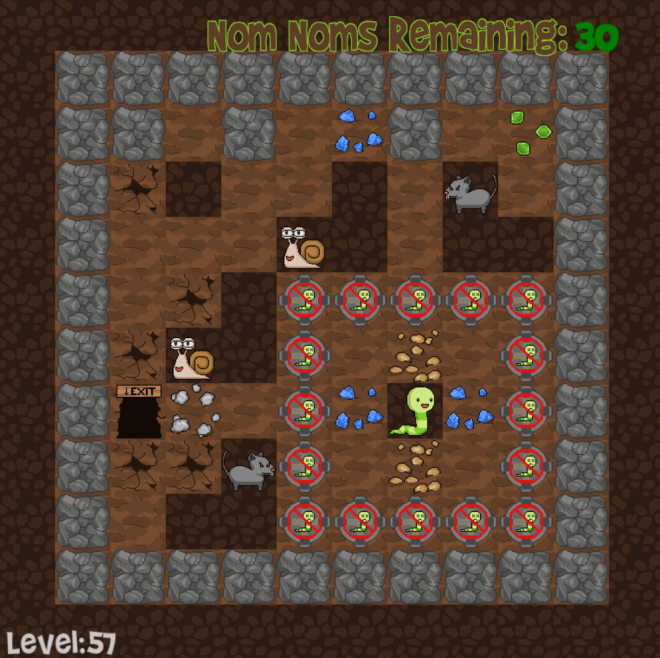 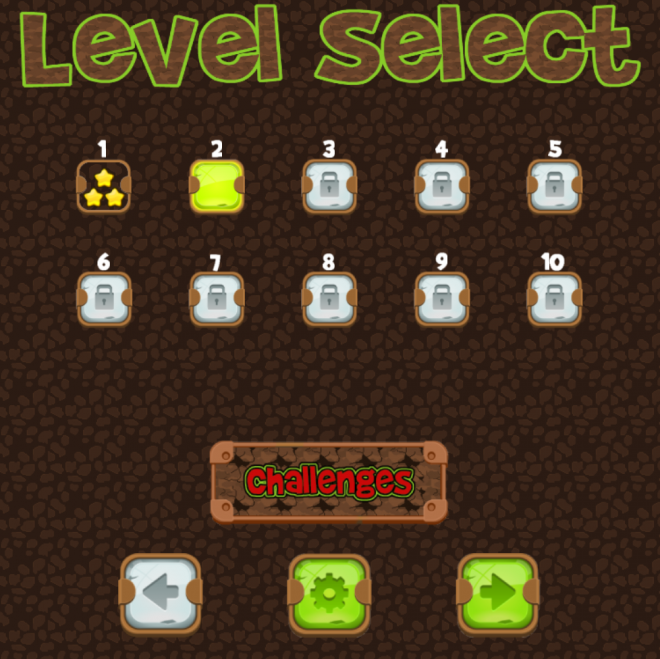 As you move in and out of levels, the game has simple level selection.  You can see which levels you have completed and how many stars you have earned on each level.  It's an interesting way to see how complete you have it.  As you earn stars you can unlock challenge levels, which are more difficult than the normal levels.  The challenge levels have a precise way to finish the map, whether using the enemies to break the dirt for you while avoiding them and eat the goal items.  They're exactly what they claim to be: a challenge.  Sometimes they can teach you different ways to approach levels.  They're worth a try if you have the time. 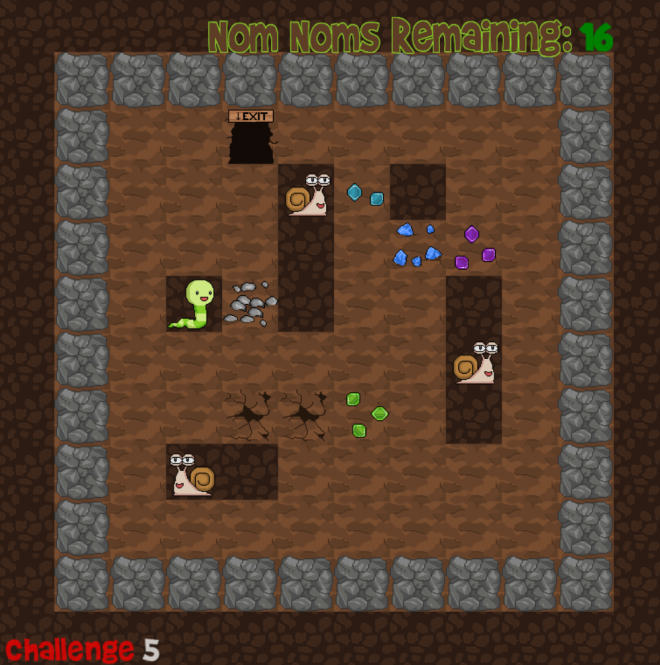 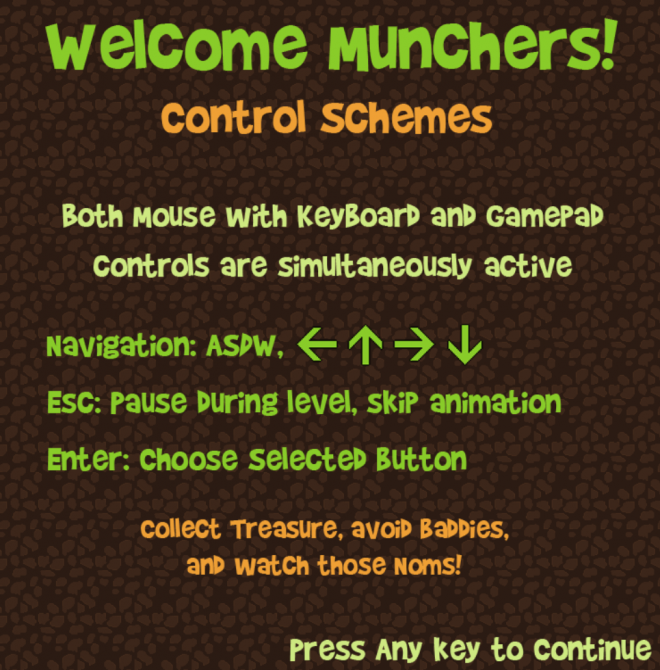 The game has super simple controls.  It's the wasd keys or the arrow keys.  It's super simple to learn and pretty easy to master.  Timing can matter as to where you move and how quickly, so sometimes it's worth it to count steps.  As far as other controls, that's it.  It's super simple.  You will need a mouse to click use the menus.

Overall this game is a good casual game.  It may be a good game to help teach younger gamers simple controls and problem solving.  For the low price it's decently worth it.  If it's part of a bundle or set it's worth a play or two.  It's worth a good couple hours to finish almost everything.  It would be a good game to play with kids.  In a bundle or on sale it's worth picking up but not as much at full price.  Definitely worth a look.

The gameplay is super simple. Move a direction, don't eat too much, avoid enemies, eat the goal items, leave.

The controls are super simple, arrows or wasd.

The levels have decent variation overall, but are the the same if you want to replay them.

Once you play a level you know how to beat it. Unless you're working to 100% the game there's little reason to replay the game.

There is a lot of repetition, especially when dealing with the same enemy over multiple levels.