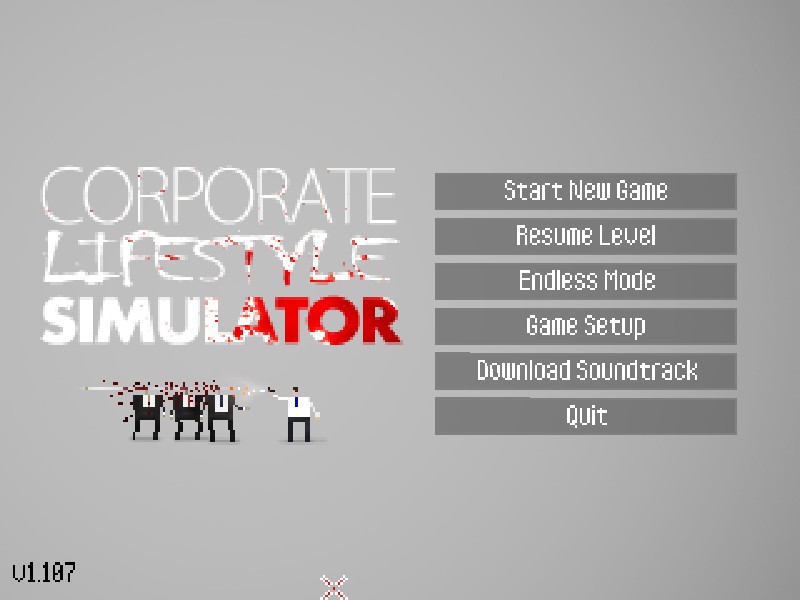 A comical game where you kill corporate zombies.

As you go to work one day you notice that there are corporate zombies shuffling around your office.  You try to work, but they try to eat your face as you try to do your job.  You have to fight your way from floor to floor, killing as you go.  But don't worry, you get more weapons than the simple piece of wood you start with.

The further you to into the game you will find new weapons.  Some are just modified office supplies, like the stapler and corded phone and throwing pencils.  But later on you will meet a soldier or cop or whatever he wants to be that has an uzi.  He follows you through the map, helping kill the zombies.  But at the end of the level the helpers normally die so you can take their tool / weapon.  Some of the weapons are quite fun, like the shotgun, flame thrower (hairspray and a lighter) and a chainsaw.  You'll find which weapons you like using the most.  And one nice thing?  As you use a specific weapon it tends to drop that type of ammo for you as you kill the zombies.  Oh, and like I mentioned, you're not the only survivor / non zombie person in the building. 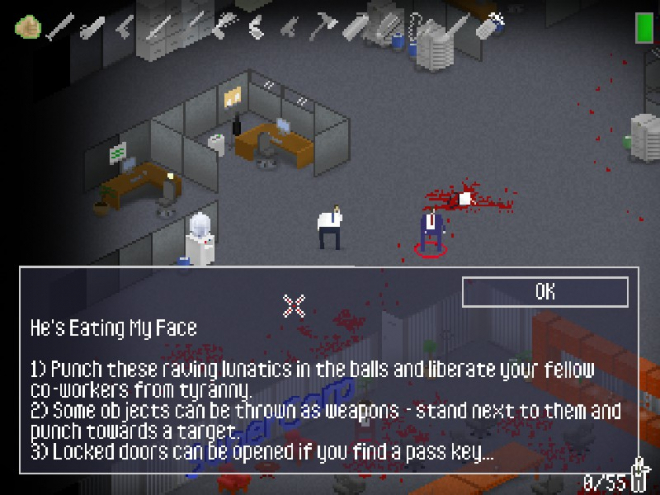 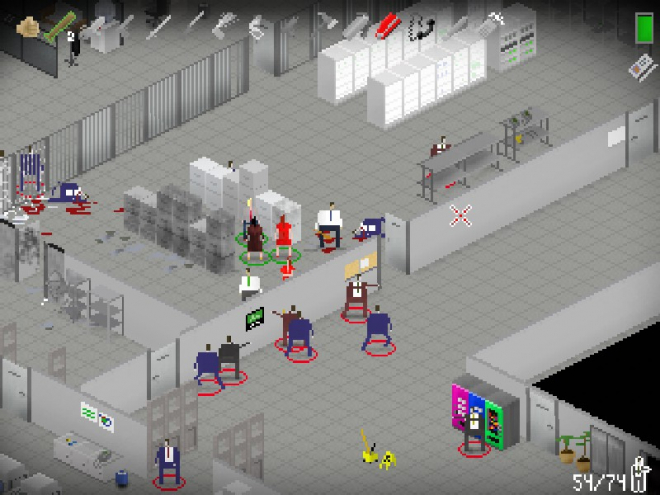 Traveling through the different floors you eventually find other real people to help with your survival.  As you find them and free them, they will start following you around the floor you are currently clearing and help fight the zombies for you.  But be careful because as they follow you and fight the zombies they can die.  Also, don't worry if they make it out of the level alive, because just by getting near them you rescue them.  If you're wanting to be tactical you could kill the zombies around a bunch of the people without rescuing them then rescue them all at once so you can have a big group near the end.  Or you could find the exit of the level and leave early without killing all the zombies.  This game allows you to play as you want, whether it's a kill them all or speed run through the levels.

At the end of each level you will get your map statistics.  It'll show you how much of the office you destroyed, how many zombies you killed, and how many people you rescued.  There are some maps that will require you to do certain things, like kill all the zombies or kill everything without destroying too much of the office.  The variation in challenge is nice since the game is pretty monotonous and grindy. 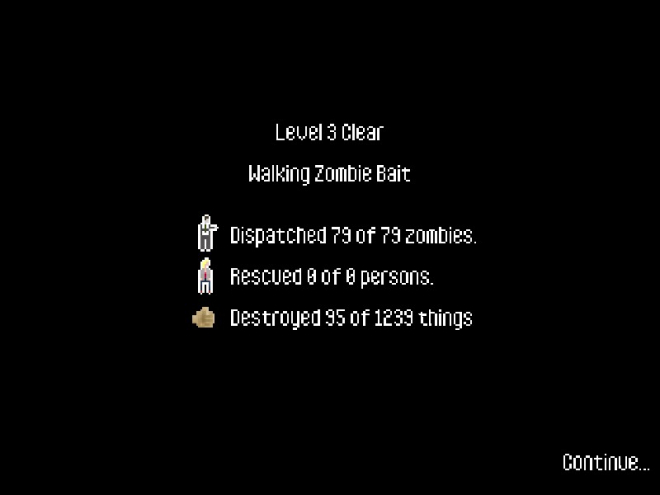 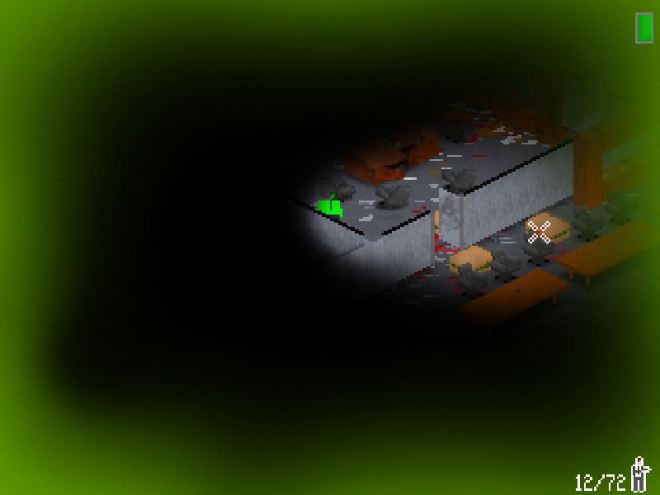 There are a few variations on the different levels.  The further you play different levels will show up.  Among those are the boss levels.  On the boss levels all you need to do is kill the boss, which sound easy, right?  Wrong, sort of.  The bosses have more health than the normal zombies and have different powers than normal.  They can shoot special stuff at you, pull furniture off the walls and throw it at you, create areas that will hurt you if you walk through them, shoot lasers at you, etc.  Each also has a special theme as well.  They are a fun break from the office crawl that you do on the other levels.

Some levels, though, are pretty clever.  You'll go through the office on most levels, but some floors you will be in a parking garage.  Near the end you'll be on the roof.  In most of the office floors there will be special zombies that you'll have to kill that will drop key cards that will give you access to some rooms where you will find other people to rescue or will have additional power ups to help you clear the floors.  If you're speed running the levels, don't worry about those rooms.  They won't be important to you.

At the beginning of each level there is a short video that introduces you to the level.  Sometimes it'll give you information regarding the map.  Many times it'll introduce an npc that will follow you and help you through the map.  The videos don't take themselves very seriously and they break the 4th wall regularly.  They mock themselves openly many times and are honest about how they are shallow segues from level to level.  They're easily skip-able, but the humor is worth the small amount of time to watch it. 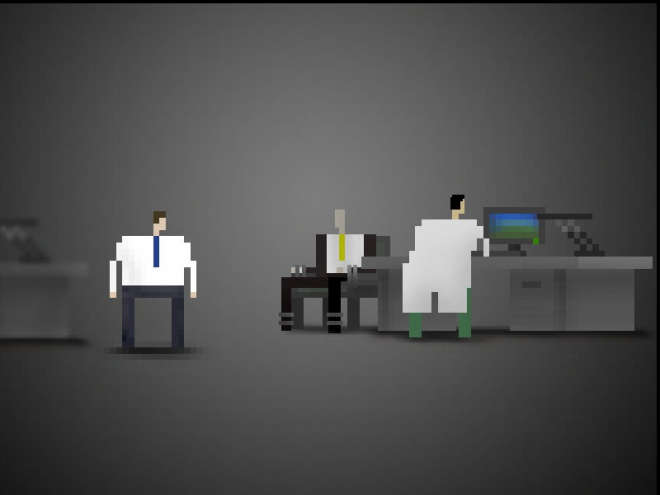 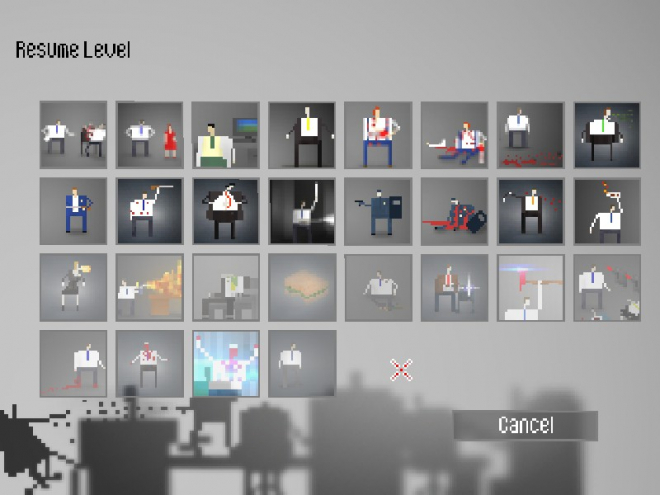 As you complete the levels it will open them up for replay from the menu.  It is an easy way to rewatch funny intro scenes or to try to beat your previous stats or to re-kill the bosses.  You only have the tools available to you that you had the first time you visited the map, so revisiting the original maps hoping to have the molotov cocktails or the shotgun isn't likely to happen.

This game is quite fun to play.  It's fun to blast through hordes of pixelated corporate zombies, sometimes with nothing more than a stapler or corded phone or shotgun.  The variety of zombies was interesting, as was variation of the weapons.  The pathing was a little broken for the zombies, as they would sometimes clump up in random locations, unable to go around a cubicle or a table or around the wall through an open door.

In the end this game is one that you should definitely pick up if on sale.  It's worth a few hours to go through and destroy all the corporate zombies as they try to eat your face while mumbling corporate phrases or keywords.  There isn't much in the terms of replay value, but it is calming to destroy everything near the end levels, especially when you have the best weapons in the game.  If you pick it up on a sale, give it a try.  The humor is definitely worth it.  Oh, and did I mention that one of the only people not effected by the corporate zombie virus was the company IT guy?

The humor is fantastic. It's a little forced at times, but overall it's quite a funny and pun-y game.

The weapon variation is fantastic. You start out with a club and eventually gain access to guns, a chainsaw, katana, and flame thrower, a stapler, phone on a cord, a taser, among others.

The controls are super simple. With a point and click for the weapons and simple directions it's a simple game to learn.

The gameplay is simple. It is also repetitive. You'll find most levels are simply destroying the office and killing the zombies.

Once you have played through the game there isn't much reason to replay it. Unless you want to get out stress from a bad day, that is.