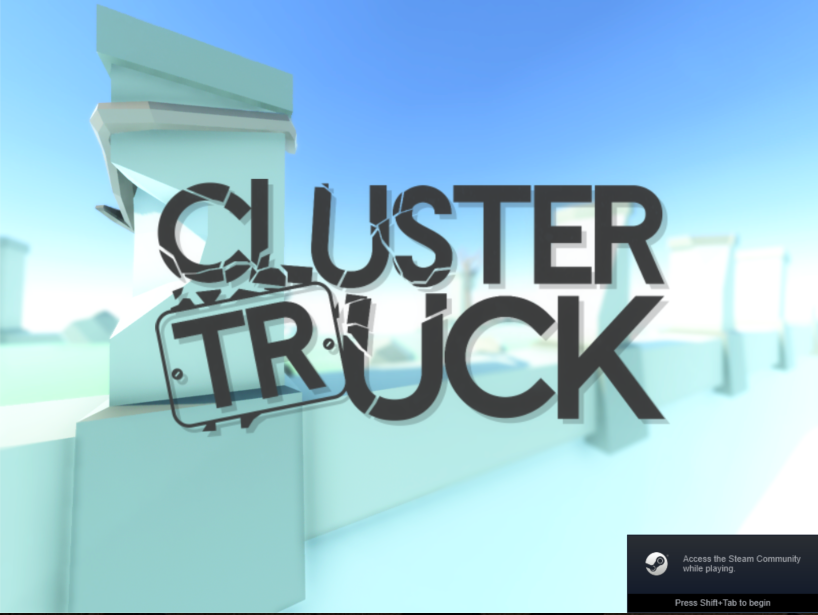 Clustertruck is an obnoxiously enjoyable platforming game.  The basic goal of the game is this: get to the end without touching the ground.  The trucks are normally going in the general direction of where you need to go, but not always.  At first the game starts slow with flat maps and plenty of trucks going toward the exit.  Then slowly the game adds hills, more trucks from different angles, working on hills and around turns, as well as signs and fences and trees and other stuff to knock you off the trucks.

The levels are separated into worlds.  As per the normal cycle, the further into the levels you get the harder they become.  More obstacles, harder challenges, more trucks or lasers or weapons to block you.  The last level of each world is normally the hardest of the set, with the first of the new world being a little easier as it brings new challenges.  It's not abnormal for the game to start out with easy challenges, then turning the difficulty up to 11 by the last level.  One difficult part is that you can't skip levels, so if you're stuck you can't go on.  You can replay the levels you have beaten, but from there you have to beat the challenge or play something else. 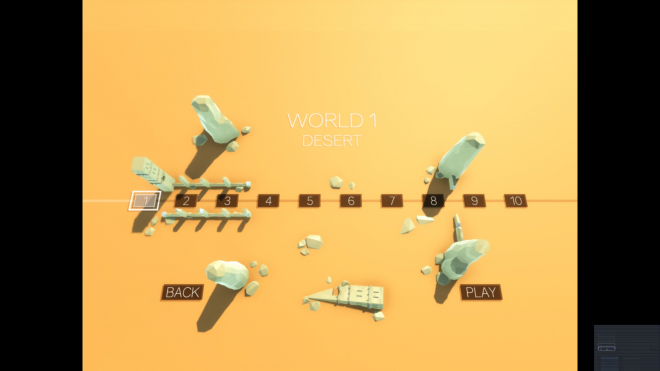 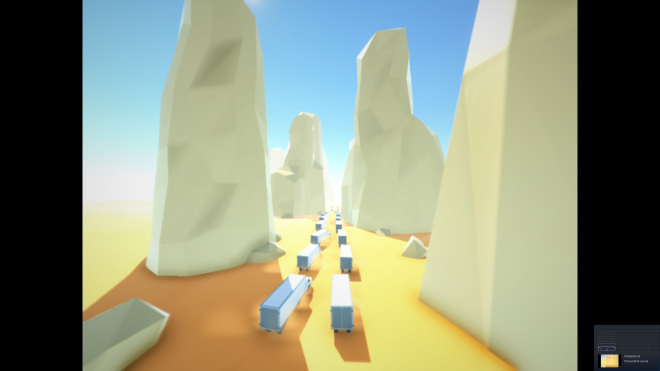 As mentioned before, this game plays off of one rule: the floor is lava.  You can't touch anything other than the trucks.  You can use the sides or back of the trucks to launch off of, especially when they're air-born, but if you touch anything else you lose the level.  The game will throw walls and fences at you, making you dodge and jump and weave to avoid getting hit.  You can sometimes ride on the pendulums and swings and hammers, but if you do so you can lose the trucks, which will cause you to restart yet again.

This game gets frustrating as it sometimes throws challenges at you blindly, so you have to play the levels a few times to even get an idea of what's going on.  Sometimes you'll find yourself launching forward only to see trucks on a platform below you driving the other way.  Or the trucks you're on currently will be launched into the air or crash into another set of trucks coming from another direction.  The only thing you should expect is the unexpected, because sometimes you're in for a startling surprise when you're thrown a new challenge you haven't seen before. 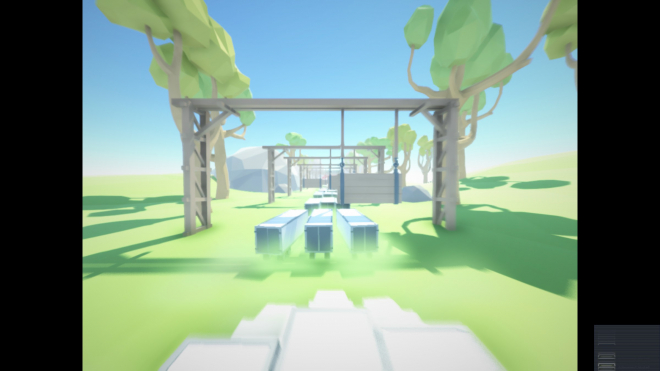 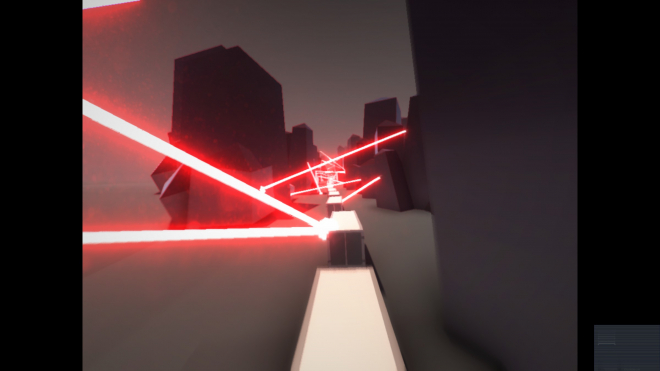 As you can see in the image above, you may see lasers, or lava, or explosions, or giant rocks, or a closing gate.  Some levels will give you ample time to see what's going on while others will hit you with the challenges almost from spawn.  A good motto to live by in this game is if it isn't a truck, don't touch it.  Sometimes you'll have close calls, where you'll narrowly miss the whatever it is that could kill you, but surviving is surviving.  They will throw more and more at you the further you get into the game, though some challenges will only stick around as far as the world you're in is concerned.  You won't see any lasers in the medieval realms.  Though you may see another variation of the item later, so be on your guard.

This game isn't going to throw a whole host of problems your way without giving you some sort of assistance.  You can finish all the levels without any abilities or powers, but they can make the game a ton easier.  There are different abilities depending on your play style.  Do you want to throw a truck in front of you?  Sure, you can have one per level.  Do you want a grappling hook?  Sure, you can use it with a slight cooldown.  Do you want a jetpack?  Sure, but it has a limited tank and can't really fly very well.  There are different abilities for different point costs, so if you want a really good one you'll have to save up for it.  There are no guarantees that it'll help, though.  No amount of abilities will cover for a lack of skill. 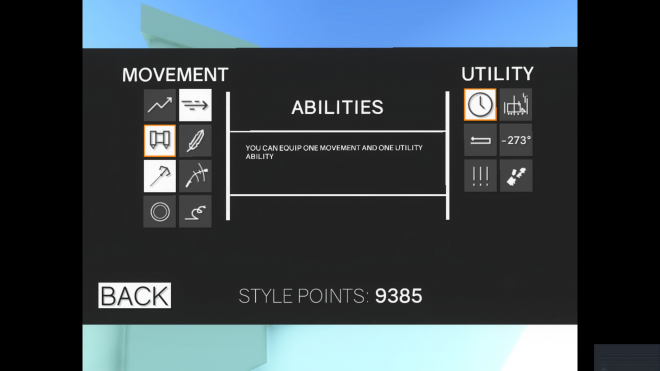 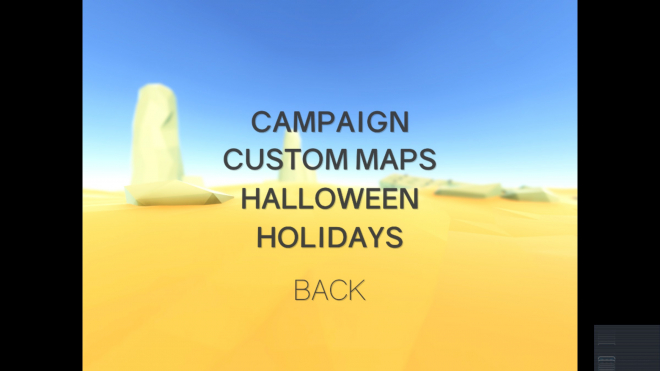 There are more than a few sets of maps to play from.  You can play the main campaign levels, as well as holiday and Halloween or other custom levels.  There is an option where you can make your own levels, if you want.  You can select which of the worlds you want to play from, as long as you have unlocked them.  Sometimes it's worth it to go back and replay old levels to grind points for new abilities.  With the variation of how the levels play it may be worth while to play levels a few times to strengthen different skills, with or without abilities.

There is a ranking system where you get more points for different reasons.  Finishing the level on the first time you see it, the amount of time you spend in the air, whether or not you beat the level with abilities, and how fast you can finish it are all different aspects of gaining points.  The global leaderboard will show how fast people have completed the level to know where you are on pace with everyone else.  It's a good function to keep the game competitive with just the base game. 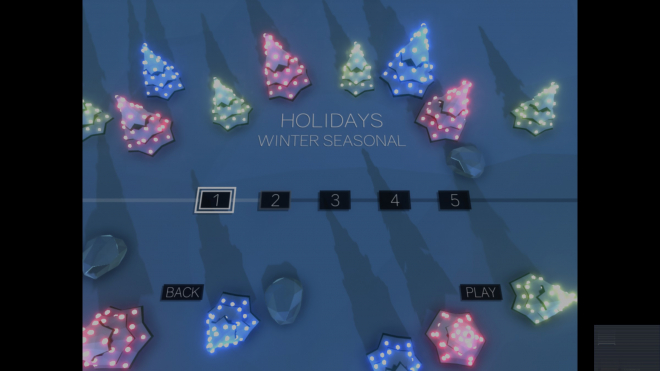 Clustertruck is greatly frustrating while also being extremely fun.  Since you can't progress through the game without beating each and every level it can be irritating to be stuck on a single level for a long while.  It is a great feeling when you complete the levels that have been giving you trouble.  Sometimes completing some levels can be a matter of luck for the first few times, but the more you play and get a grasp of their mechanics they become easier to complete.

In the end this is a great game.  It has a lower replay value with the earlier levels, especially as you get more experience and abilities later in the game.  It has a better replay value as there are custom levels, depending on how many of the levels you want to either develop or play from other creators.  It's a popular enough game that if you struggle too hard with a level there will be walk throughs to help get you through the challenge.  If the game is on sale, it's worth picking up.  It's worth at least a casual play through, if not a serious attempt to complete.

Gameplay is enjoyable and challenging. It scales well and even though it gets repetitive, it doesn't get old.

The controls are super easy to learn, but are very delicate. It's easy to make simple mistakes that will cause you to lose and need to replay levels.

The graphics are simple yet graceful. As the game focuses more on gameplay than graphics, it doesn't require a supercomputer to run on the highest settings.

This game scales its difficulty elegantly. It teaches different skills as it requires them, so you can't have a linear mindset to beat most levels. It won't ask more than is possible to beat it.

The music adds to the gameplay and atmosphere without distracting from it. It is forgettable in the long run, though.