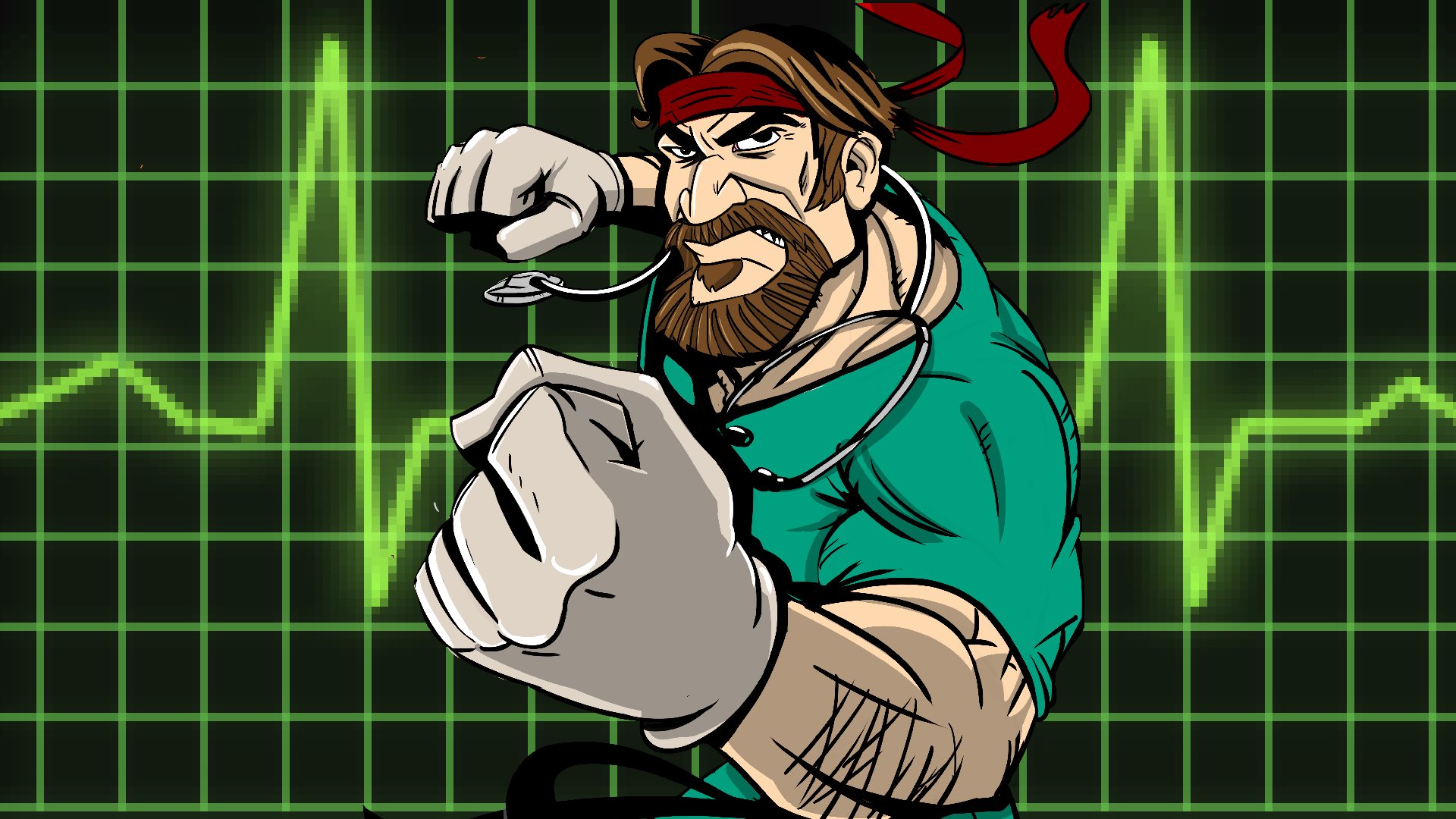 There's a reason Adult Swim is known for its comedy

If you were a gamer in the late 80s, it was basically a given that you played River City Ransom. That game, by the late Technos Japan (now Arc System Works), was a breakout title for its mashup of brawling, exploration, and RPG-lite elements, with a distinct art style that developers still emulate to this day.

Fist Puncher certainly wears this inspiration on its sleeve, but would have been better off sticking to the formula. Instead, it tries and fails for the most part, to incorporate the look and feel of other games like Double Dragon and Bad Dudes. The result is a disjointed, generic comedy vehicle that shines early on but gets old quickly. 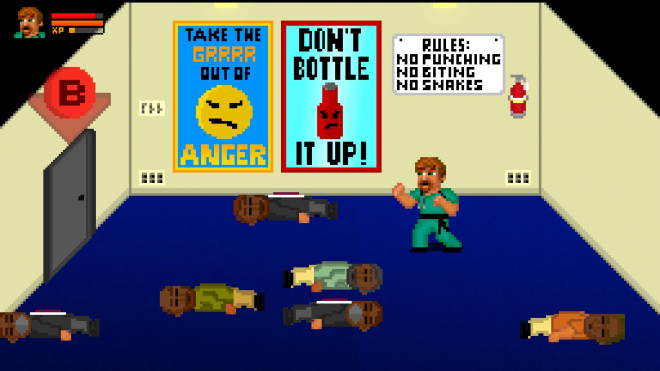 I've always been a fan of Adult Swim comedy, its advent being around the same time as I hit my late teens, so it was a slice of television that grew with me. To say that the channel has its hits and misses is putting it lightly. When it shines, it's hilarious. When it doesn't, it falls flatter than alien pancakes. Do you see what I did there? Probably not, and it speaks to the point of what I'm getting at here.

Obscure jokes are Adult Swim's bread and butter. I often see them trying to apply this methodology to their games. It works better in some cases than others. Part of me really wanted to give them a pass in this case and say that their slide into sheer adequacy on this title was just an attempt at being cleverly meta (hence the name) but a bland experience is a bland experience nonetheless. No amount of wink-wink nudge-nudge can really fix that. 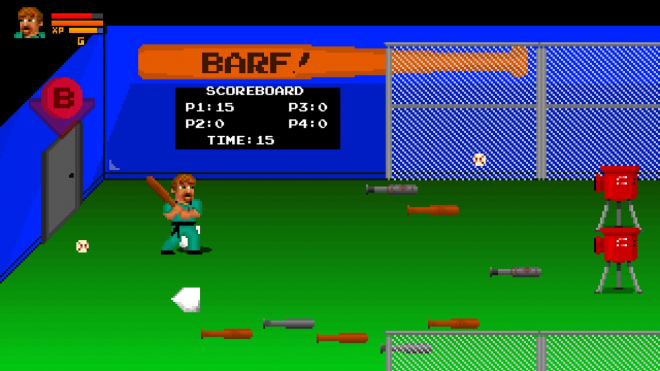 The game is at its best when it throws a curveball into the grind. This happens a lot on the earlier levels, to such a degree that one could argue that this game would have actually been better, had it contained half the amount of levels and pitched a cheaper price. Instead, we get treated to an enjoyable 10 or 12 levels, with the remaining majority feeling like they were put in just to make it seem like there was more to enjoy.

This mindset is echoed in the character selection, which is filled with an interesting, varied lineup on the surface. However, this is again sabotaged by the way the game treats progression. Despite unlocking several characters throughout my playtime, I never felt any inclination to switch, and indeed I would be penalized for doing so, since you have to build up your chosen fighter's stats in order to tackle later levels. 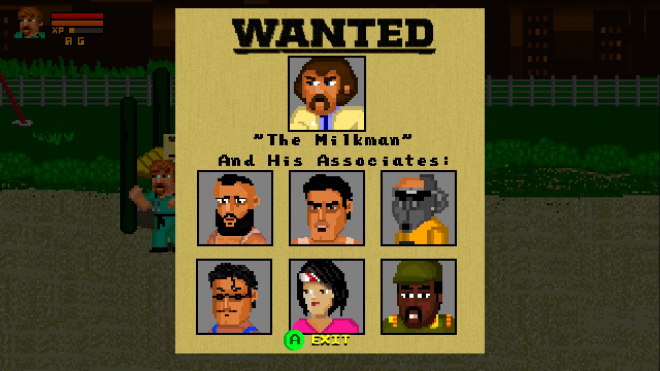 Likewise, the villains are about what you'd expect from Adult Swim, a mixed bag of stereotypes pushing the bounds of political correctness. You'll find everyone from the Islamic terrorist to the overly-aggressive feminist in this bunch, and while some of the baddies mix it up with a special move or two, they are largely forgettable, and seem to exist merely to be "that person you'd like to kick in the teeth" and nothing more.

Speaking of which, you'll certainly be kicking in a lot of teeth, and by that I mean you have to fight hundreds of the same guy, by doing the same move, over and over again for many levels. Especially on the later levels. One level in particular had me searching through rooms that I would then have to backtrack through, all while sealing the doors of each room, and forcing me to fight 20 or 30 of these cut-and-paste hooligans each time while I "searched" for a key to open the door to the boss. It was 30 minutes of pure boredom, and then I died, resetting the level. Normally you would at least have checkpoints, but not in this case, which was infuriating. It is these moments that make you want to put down the game entirely. 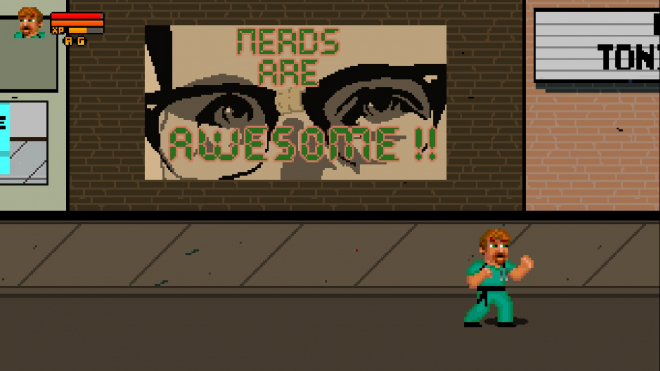 To that end, if you're a big fan of old school brawlers, you might get some satisfaction from giving this game a shot. If you're looking for a callback to the days of yore, you may want to stick with the actual modern-day sequels of those games. I can give Adult Swim a few props for trying their hand and making it their own, but at the end of the day, this generic fighter gets just a little too generic for a solid recommendation.

You can certainly tell what they were going for here but the execution is either forgettable or overly exaggerated.

Standard fare sound effects, the music is oftentimes confusingly placed within a level and seems to have no real correlation to the game itself.

You'll end up doing the same move pretty much over and over for the entirety of the game.

It's funny enough to be worth its while for a couple of hours, but then it feels like the developers ran out of material to work with.