A roller coaster simulation in VR. Stuck in Steam Early Access Hell, but it does have cool levels!

VR Coaster Extreme is a pretty creative Coaster Sim, but it is stuck in Steam Early Access Hell. There has been no updates on the game, or anything from the developer himself since December 2017. Let's talk about the game itself as there really is a lot more positives than negatives overall.

There are a variety of stages to choose from, you can be a little toy train and roam through a house, a theme park coaster, running through a pirate scene, a city romp, a mine cart runaway, and a little hillside. I would say that the theme park is closer to being completely done, the track looks great, there are sounds of people screaming and having fun, good sound, and it really did not suffer from much slowdown.

The two levels that really stuck out as interesting are the Pirate Ship and Mine Cart rides.  The Pirate Ship stage is really cool because you play above and below water, each with its own cool visuals. Above the water you get a pirate ship and a colossal squid, below are whales and dolphins... watch out for that shark!!! 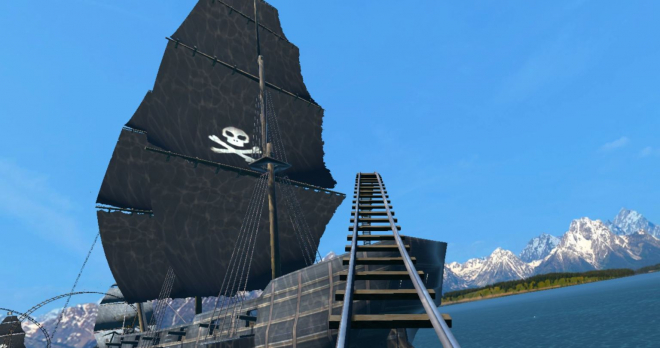 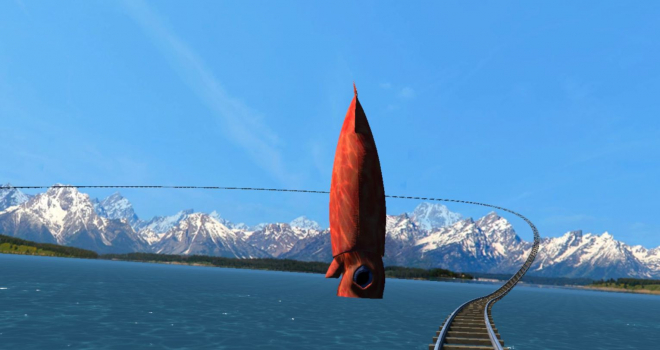 The Mine Cart is cool because you feel like you are in an abandoned mine, mixed with Indiana Jones, and Big Thunder Mountain at Disneyland. The visuals are beautiful, the different colored lights in the mines look great, and I felt myself wanting to dodge some of the cavern walls as I zipped through them. There are some dragons that are about in the level, but lack sounds... but they looked cool. 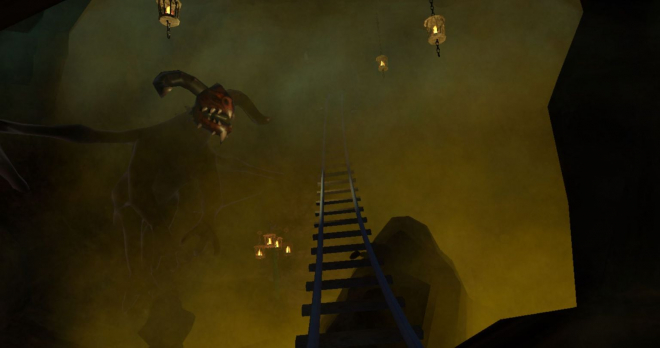 I hope that the developer does go back and put some refinements in the game as it is a really good start to the VR Coaster games out there. The price does not feel like it is going to sink you, but it is only a 15-18 minute romp to play all of the levels. Most arcade Coaster games are about $5 for a 3 minute ride, so it averages out. It is very unique experience and when you get bored... throw some jazz hands out there!

Review Note: The reviewer received a copy of this game for free. This does not affect the content of the review or its final grade.

You have hands! This is cool as you can cover your eyes, give peace signs, or even the infamous devil horns! Very nice touch as you can do something while you look around.

I have to post an average on the graphics as some of the levels are really cool, but others are totally incomplete and have placeholder images. The lighting of some levels is amazing, while sections of track have temp lights setup.

The only stage that had anything remotely close to being finished was the carnival stage, the rest really need a complete overhaul and pass on them.

If the levels were further along, you could play this a few times. It was fun watching others play it, but being so incomplete, only updates would cause you to play again.