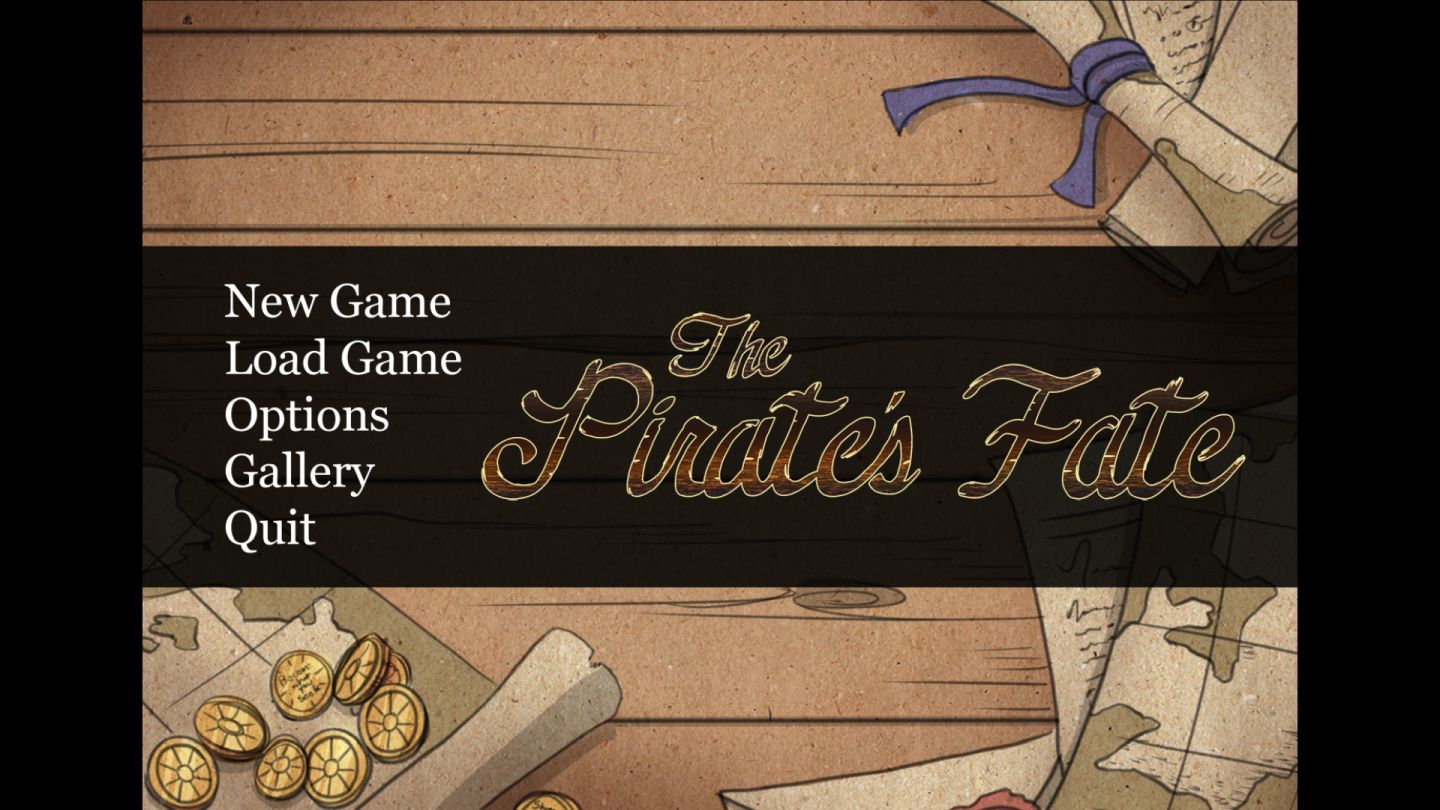 A Visual Novel that has a great pirate setting that leads a poor spice merchant named Mila down an interesting treasure hunt. There are numerous endings, romances, and... transformations?

Mila was a simple spice merchant when her ship was destroyed in a terrible storm. She is rescued by a group calling themselves the "Dread Pirates", but really they are more glorified treasure hunters instead of cutthroats. The plot changes as you go through each choice in the game. Some choices lead you to being a mermaid, others you take control of the ship as the captain, or even becoming a Guardian Angel, and each story creates transformations to the crew. 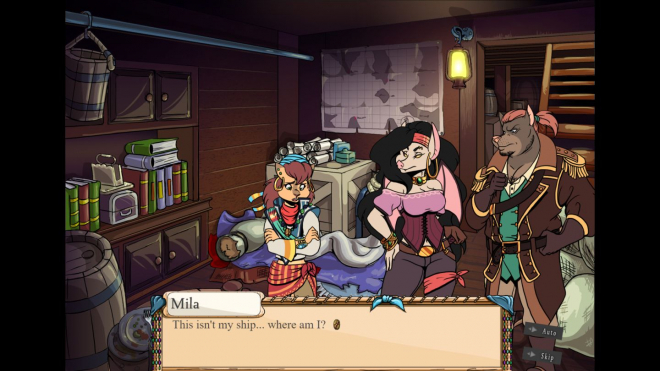 The transformations are often humorous, while some just feel out of place and an excuse to modify a character. Choices made will alter a character's look and others felt like a transformation/should/ have happened. It is almost a shame because I liked certain transformations more than others, and I like the "default Mila", but that is a personal preference and will not lose points as part of this review. The point is, some of the transformations and how the characters reacted to the change was hilarious.

There are Romance Scenes between characters, often triggered with a comment of "I'm interested in you." This lets you know that the very next scene is going to couple the 2 characters. In some cases you will have the option to sleep with the whole crew, and in others, the choice is there but it is not selectable (which brings us to the, why even bother being on the menu if you cannot do it, question.)

NOTE: None of the paths I went down ever led to any nudity as the scenes were all tastefully done, but there could be one I did not see. 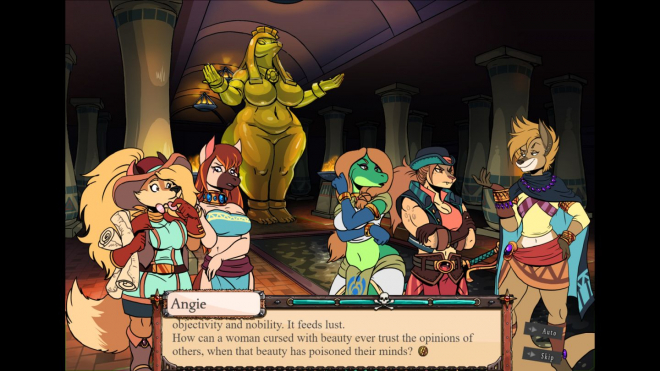 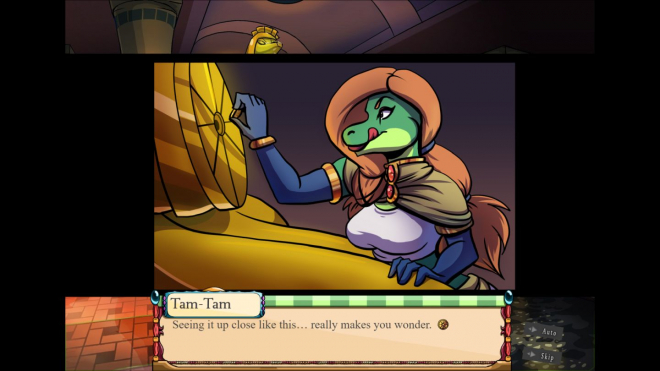 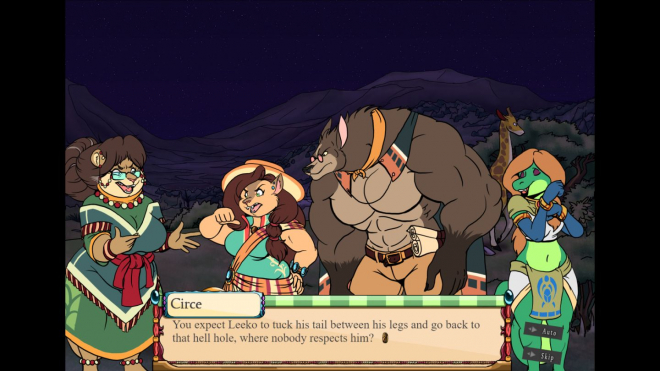 For a Visual Novel, it was a lot of fun trying to figure out where the paths would lead me. I found myself really getting connected with certain characters and then laugh when they transformed, or give me the regret of "why did I say that" as they transformed again. I really wanted to know more about the Coins and the crew. The game kind of lacks character depth and things just kind of conveniently occur and you have to buy into the story or you will toss your arms up in the air. You will find yourself just there for a wacky story and little else as some choices make sense on transformation and others do not, or even make you wonder why a specific choice did not transform you again or at least revert you. 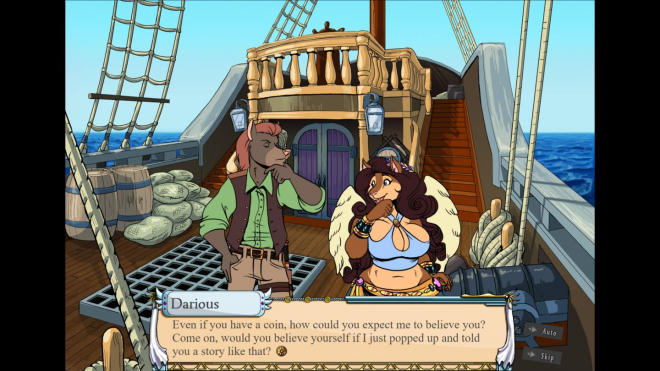 The story is too convenient or jolting at times, you just have to go with it. You have one timeline where you literally messed up the power conflict in the royal capital and you toss a princess off your boat and that is that. There is another where you "save" a barmaid and her son but the very next day she is just murdered anyway. There are just these weird spinoffs that lead to nowhere and or you do not care about, but they are brought up later to feel like you needed to be given closure to when not needed.

The voice acting feels like an afterthought. A few of the characters just do not sound all that great, especially considering what race they are. If they transform, their voice does not change, no gruff change or anything like that. An example would be when Mila becomes stronger but still has her soft and meek voice. Gender change voices are there, but was weird that their accent changes, like Tam-Tam.

A design decision was made to only incorporate some of the VO instead of everything being voiced. With most VN games, all of one character is voiced completely, very specific scenes are voiced, voiced the whole way through, or just not at all. The Pirate's Fate seems like it is trying to add VO to specific parts, but it feels more random on when VOs were used.

There are no Video Settings in the game, so you have black bar sides or a stretched image to fit your monitor. The Romance and Gallery sections feel a little clunky and should have included a "Page Number" to it and auditory beeps to let you know when you got to the End of the Galleries. It feels like you can just keep pushing the right arrow forever. 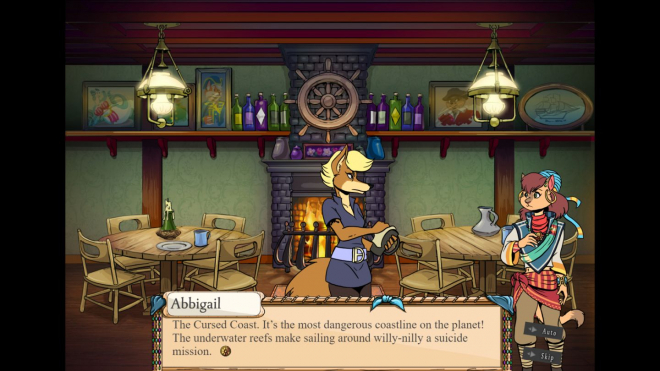 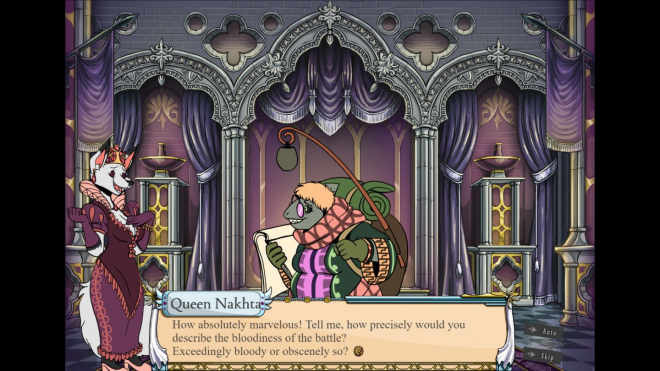 Overall, the game is very enjoyable. There are a ton of paths to choose from, romances to complete, collect Steam Trading Cards, all wrapped up in a pirate setting. Hopefully we will see an update for Achievements, but since it was originally designed without, it could be tough to put those hooks in later.

There are also some cool DLC that are available that include the Soundtrack ($4.99), a prequel-ish comic book ($4.99), and large Art Book that contains a ton of images ($9.99). While I did not get the chance to review any of those, I will say that the music in this game is really well done, so I personally may pick up the OST. 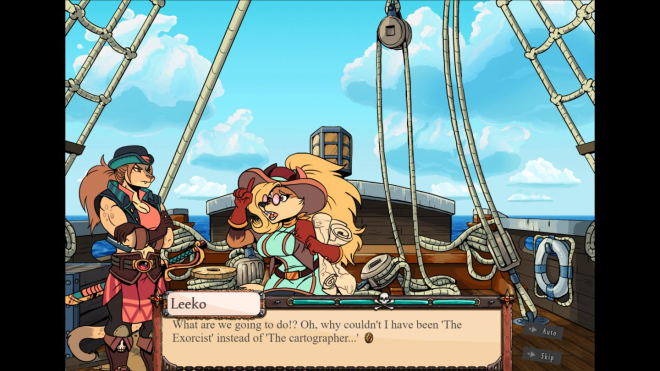 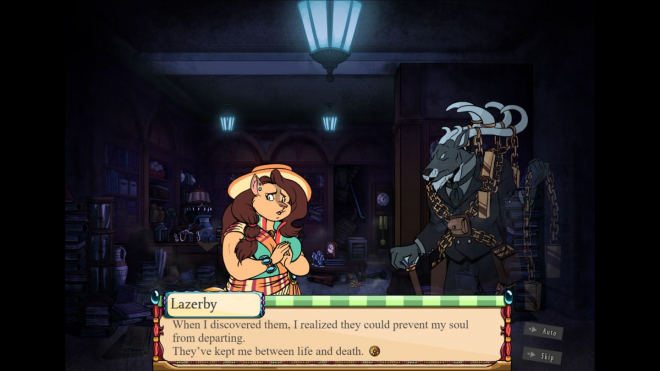 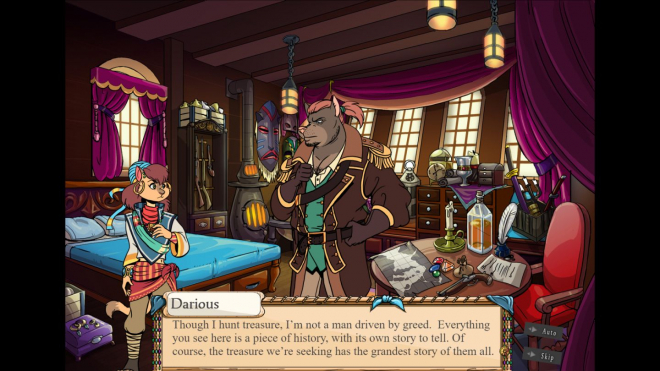 The VN is done with a very stylized look and feel. There are some issues with the menu UI and visual display.

It has a really good soundtrack, not too repetitive and really fits each scene. It suffers with a few bad voice actor choices and transformation acting not changing.

The story is pretty flowing, there are really odd breaks in the choices during some points, but they can lead to interesting endings. Speaking of endings, there are a lot of endings and romances that you can get involved in.

There are a lot of endings and romantic scenes that are unlocked through the branches in storyline, so there is plenty of reason to come back.