A Visual Novel that involves a flowering relationship between a boy named Yan and a fox spirit called Mori.

Fox Hime Zero is a Visual Novel that takes place on a remote mountain Observation Camp, some 5-hours away from where the closest city is. The main character is Yan, one of the college students who volunteered to take up residence at the Camp and do daily recordings of plants and animals in a notebook. 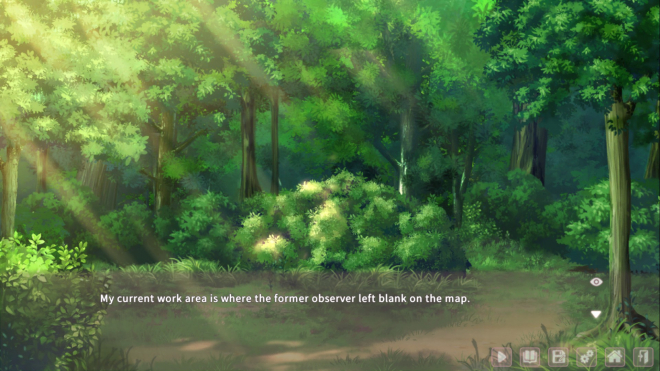 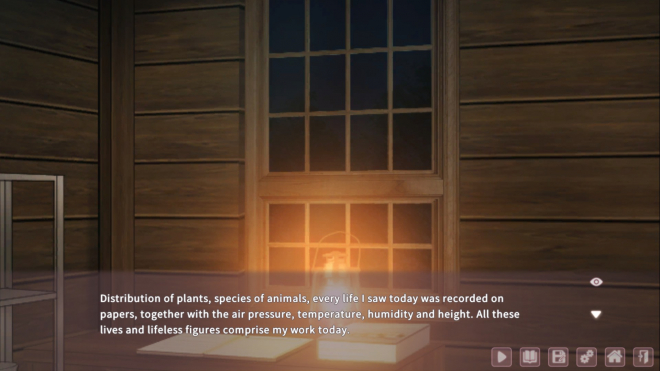 While Yan is on his research mission, he winds up helping a poor fox who is injured by the river that startled him. The fox, or vixen as we come to find it is female, is actually one of the fox spirits who are living in the mountains. Yan had helped the vixen by wrapping her hind leg with his handkerchief and leaving her be as she bolted into the forest. As he gets back to camp and over the course of the next few days he feels as if he is being watched. This leads him to Mori, the fox spirit who wanted to return his handkerchief as a 'thank you' for his help. Of course he does not believe her, so how does one prove to a non-believer? Transform into a fox of course! This is the beginning of their story and everything that happens from now on. 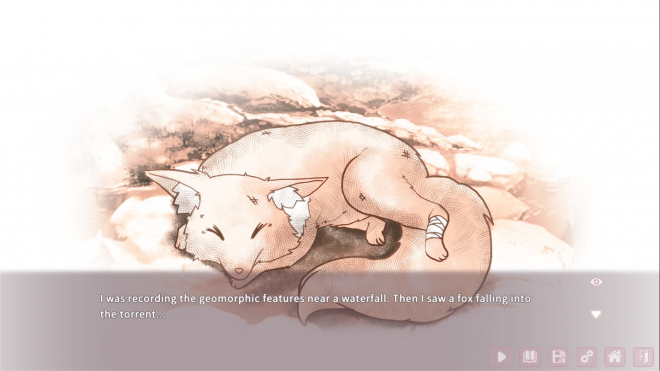 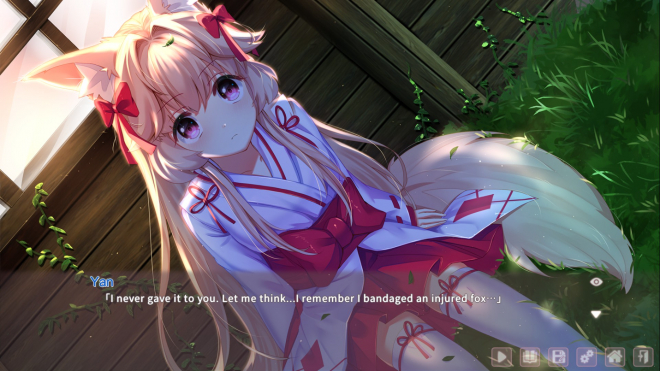 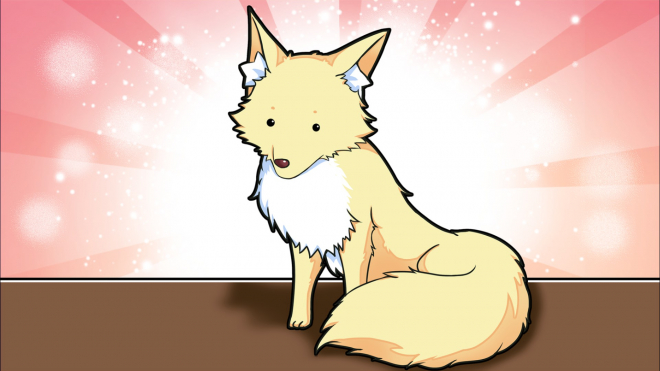 The story is your typical "college boy is kind of smart, but also a butthole, and runs into the innocent and clumsy girl and they both have the forbidden crush on each other." Yan is kind of a jerk how he treats Mori as she is innocent and does not know much of the human ways as she is still a younger spirit fox. We know she is being trained by a superior she calls Lord Sky Fox, but do not get any tidbits about them until later in the story. (In order to prevent spoilers of the game, I will leave it at just that).

The game has numerous scenes that are beautiful and there are many romantic scenes that will make your heart melt. The relationship between the two characters feels very rushed and you may find some of the conversations kind of boring to listen to. There are also times where you can get lost between what Yan is saying and what he is thinking, so it can be a bit removed from the game. There are also interesting choice words that happen in conversation that do not make sense; lots of the term "fellow" in places they could have used "she" or "he", but this is chalked up to translation issues. 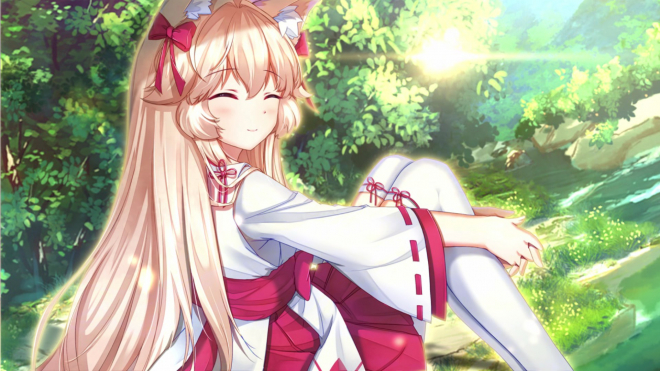 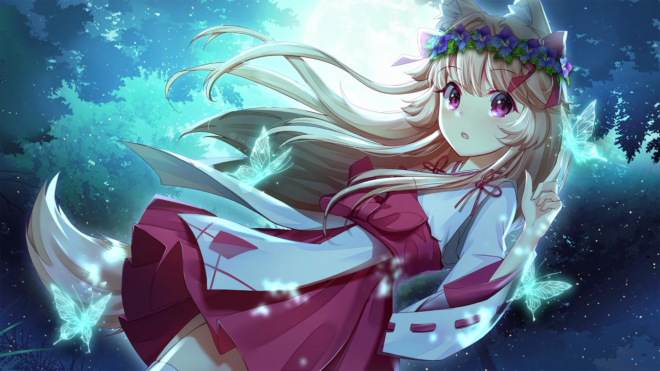 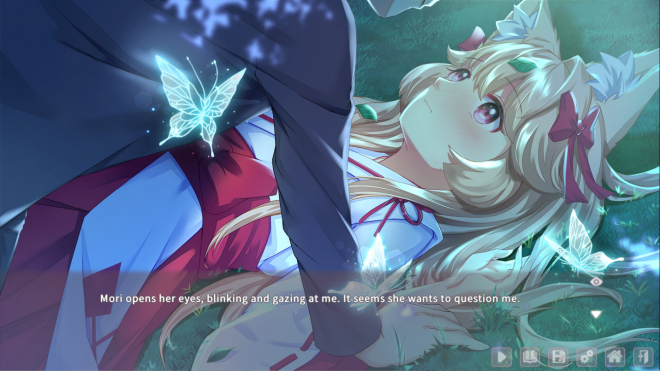 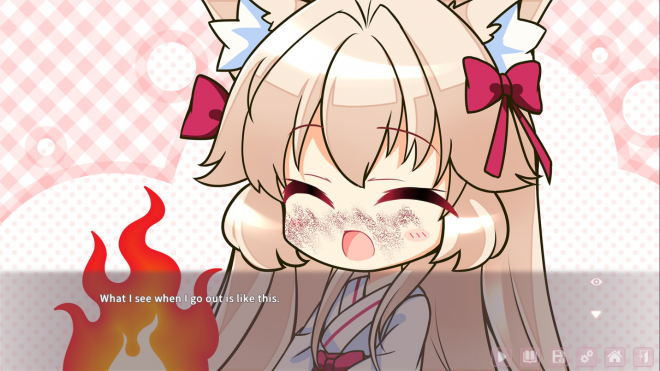 When Yan and Mori do admit their love for each other, Yan wants to take her to town as she has never been to one, and this opens it up to a dating scene. It is kind of cute how Yan has to figure out how to get Mori clothing that is not so formal, getting her to hide her ears and tail, and of course the mishaps that will occur.

There is also another story that is going on at the same time, but that will be left for you to enjoy as it would start giving away too much for the end of the game.

The game has 8 chapters and will take roughly 3-4 hours to play through it if you read everything at a moderate pace. The ending just kind of ends, it does leave it open for a sequel. You should also be aware that there is another title called Fox Hime and it is made by the same developers. This game has no relation what-so-ever to this game, and it is weird that Yan is the name of the protagonist and Mori is in it. No idea why this was done, but the two games are unrelated and Fox Hime Zero is much more flushed out than the other. 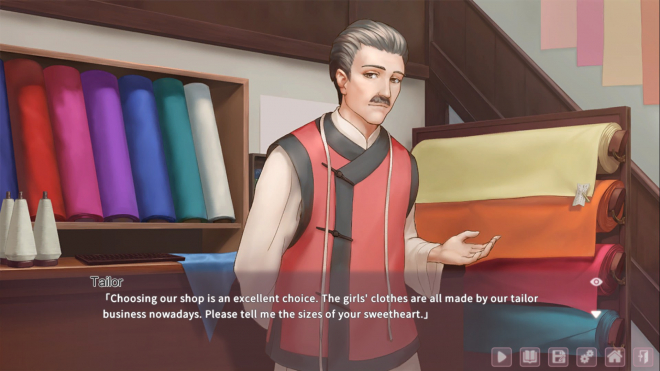 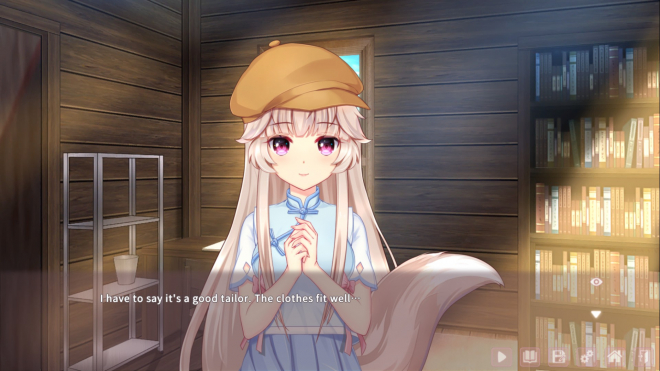 There is no real controls to speak of. The Mouse does what it needs to, and you can set the game to Auto Play the conversations at different speeds.

The art is very well done. It uses Live 2D animations rather than the stiff cardboard cut outs that most VNs use. There is a set of poses that make Mori look blurry, and that is too bad as it is really noticeable as she is normally so much higher-res.

It has a really good soundtrack. The music can feel a bit repetitive, but it is drowned out quickly as you tend to focus on other things. The female Voice Actresses are really good and fit their characters very well.