A game with two stories that intertwine and offer a perspective on life.

The First Tree has two different stories going on, where one is a narrative about a son talking to his wife about a dream and connections with his father. The other portion is the actual game play where you are playing a fox looking for his missing pups. It is an interesting way to tell a story about a son wishing he would have not left his father alone out in the land he owned in Alaska, and seems like the son, Joseph, and his wife Rachel decide to pack up and move back onto Joesph's father's land.

The art style is very unique and I loved it. There are some beautiful scenes in the game, and the sun location flashing through the trees to the game area is brilliant. The soft melodic music plays, making the game so peaceful and tranquil as you are collecting orbs (the game's collectable) and solving little progression puzzles along the way. 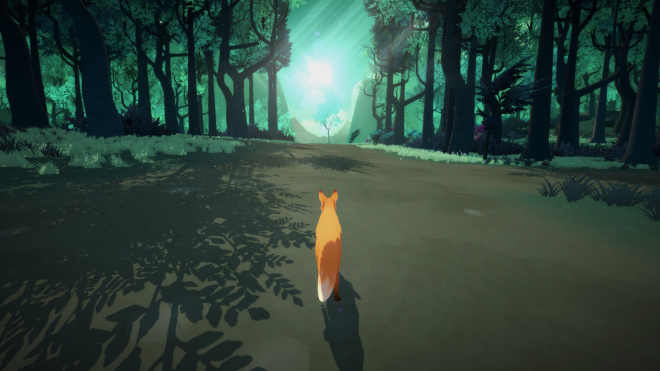 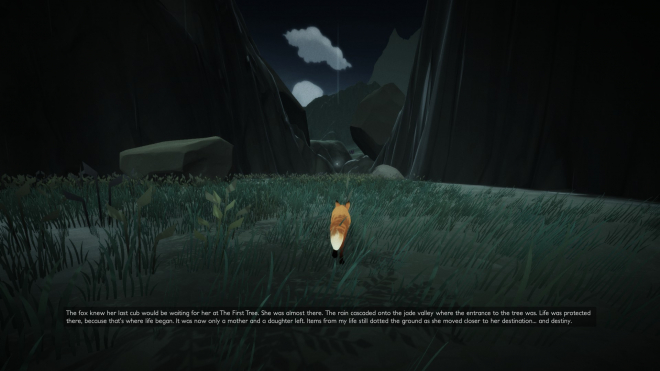 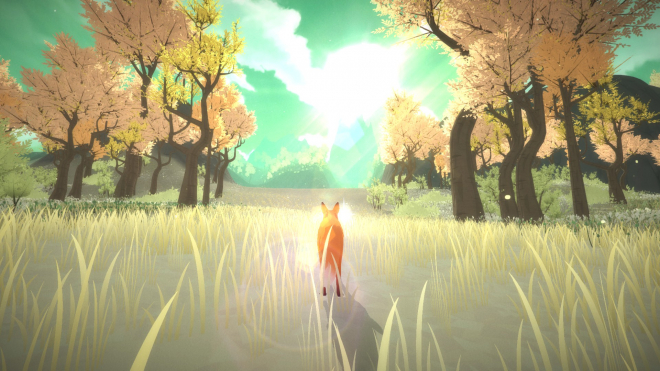 A few key things that you have to look for are pillars of light. These are markers for story and aid with progression of the game. Keep an eye out for these, they can be seen at quite a distance, and they are required. Once you get there, you have to dig at the site and this will cause Joseph to speak about the fox dream, or talk with Rachel about his own life. 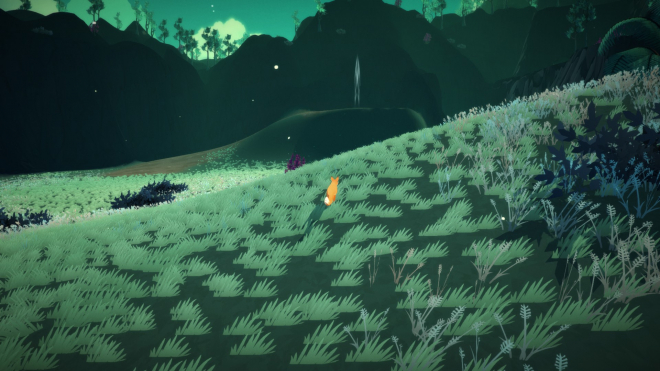 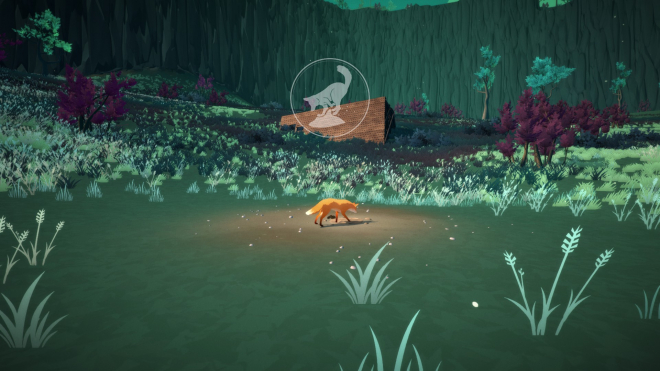 There are other puzzles to figure out such as finding 3 obsidian stones in the area you are in. In some cases, you kind of know where to go, in others you have to wander all around looking for the puzzle object. In the case of the stones pictures, I ran around aimlessly for a while but kept myself looking for Orbs. 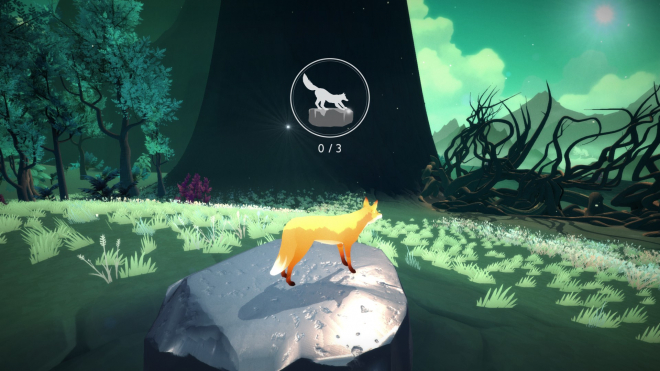 This really starts to speak about navigation. There are no easy markers to follow, no hints to move you the correct way, and no mini-map. You can wander for a while, completely lost for what to do or where to go. This really kind of hurts the game as some of the zones you play in are large and even running it seems to take forever to get anywhere.

The game also suffers from problems with its double-jump action. You have to double-jump as soon as you decide to perform it, unlike other games where you can jump-pause-jump. This can make for frustrating jumping portions of the game, sometimes causing you to fall and have to run all the way around and try again.

As for regular locomotion, the game does very well playing with a controller. It feels rather natural, even if you cannot remap the buttons. It does have an issue of massive slow down on movement if you go up a slight incline, and then it almost fully recovers. I get you are going up a hill, but at running speeds you feel like you just hit a wall and have to crawl up it.

The game suffers from a drab story about Joseph and his estranged father, and I truly believe that this is the fault of the voice actor. The voice acting for both Joseph and Rachel as so soft spoken that it does not sound like a real conversation, or narration. I am glad the game has subtitles as I toned both of them out and read the text. It is unfortunate that there are no volume controls in game to just shut the voice off and listen to the rest of the game.

The visuals are just what sells the game though, especially after finding one of the fallen pups and winding up in a mysterious reflective lake. It was very jarring to swap art pallets like this, but I didn't mind as it felt like you were connecting with death a bit. Thankfully the spirit animal you follow from point to point was easy to spot after traversing a little bit, as there is zero direction here. 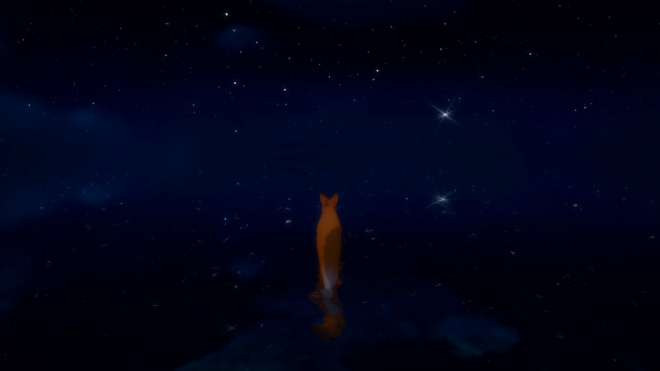 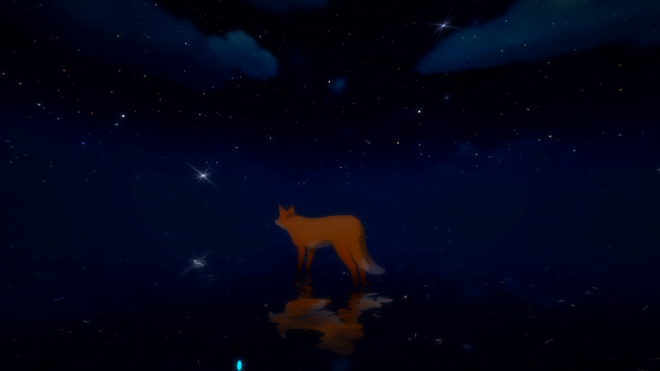 I do recommend the game through the flaws as it was very enjoyable. The very last section was a bit of a surprise, and I was a little lost at what to do, but worth it. The price for entry on the game is low, so do grab it and add to your play list, you won't be disappointed. 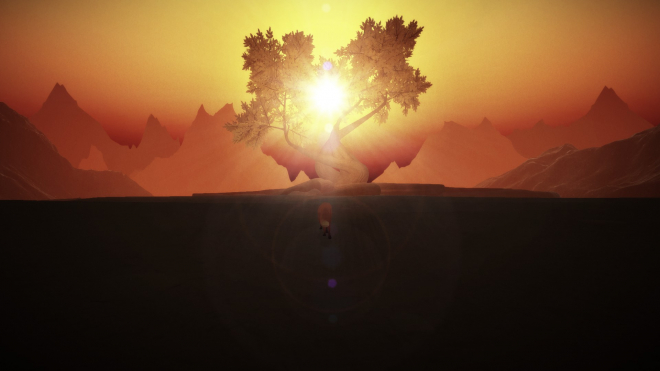 Review Note: The reviewer purchased the title at their own expense. This does not affect the content of the review or its final grade.

They handle pretty smoothly on a controller, little more frustrating on the keyboard. The double-jump lacks refinement, but gets the job done.

It is pretty much stylized, so do not expect realistic scenes, although the final portion of the game changes that. The grass and shrubs do get in the way a lot due to the fox's size, and some of the repeating patterns look horrible at a distance.

The game hits all the major check marks of a good audio sweep, but the voice acting is pretty bad and lacked any emotion or feeling. There are also no volume sliders, and I am thankful subtitles are available as I found myself drowning out the voices.

The game is pretty slow, and I could not go through the game looking for the few secrets I missed. There is no New Game+ or anything that would have you going back. So if you like achievements, maybe, but this is a "run and done" game.