Chiaro and the Elixir of Life

What happens when you grab numerous fantasy books and styles and create a puzzle VR game.

Chiaro and the Elixir of Life kind of reminds me what would happen if Alice in Wonderland and Myst have a VR baby. The game is set in Neverain where Alchemy is used to bring to life robotic lifeforms called Alive Machines. A special Elixir contains this ability, and the humans of the time go to war over the power which eventually decimates Alchemists, alive machines, and much of humanity.

You play as Chiaro, the son of Alchemists who do not survive the war. He lives out in the middle of nowhere alone. He eventually grows bored and builds Boka, an alive machine penguin, using a special core. Once activated Chiaro quickly realizes that it could have been a mistake activating this odd penguin; as it seems rather annoying. 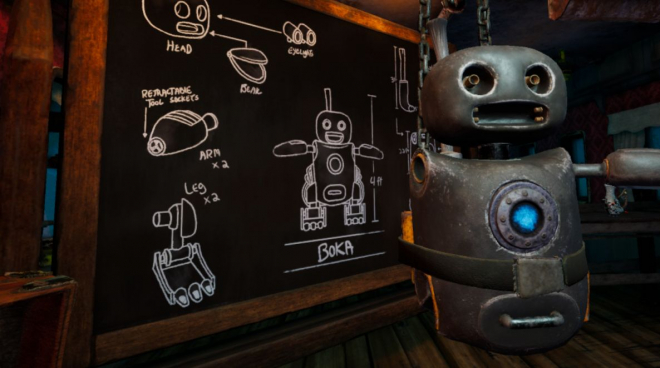 The game is reminiscent of Myst, as you are left in the middle of nowhere with little to go on and must solve puzzles to progress through the story. The art style also kind of reflects this comparison as it is unique, a mix between realism and something out of Howl’s Moving Castle. The main goal is trying to figure out what is going on as Chiaro receives a message from an ancient living machine through Boka. Between bad dialogue and thin story, you are left really wondering what you are playing. Once you become involved in another living machine, Scoria, you are unsure what her deal is, but I did find her to be the best character in the game.

There are 11 chapters each containing a specific set of collectibles; a jeweled coin. Some levels have more than others, but there are 41 to collect for you Achievement hunters. The game itself is roughly an hour-and-a-half playthrough, but there are enough achievements to extend it to roughly 3-5. It is not a long game, but it is worth going through to the end, the last boss was a lot of fun, albeit extremely buggy. 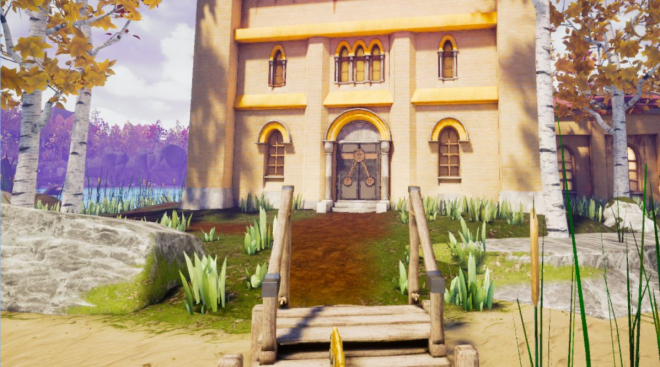 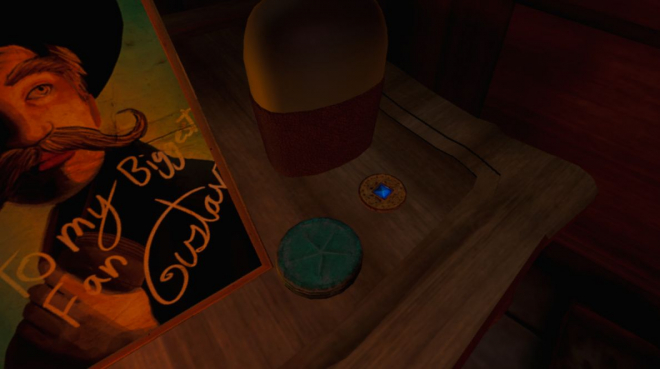 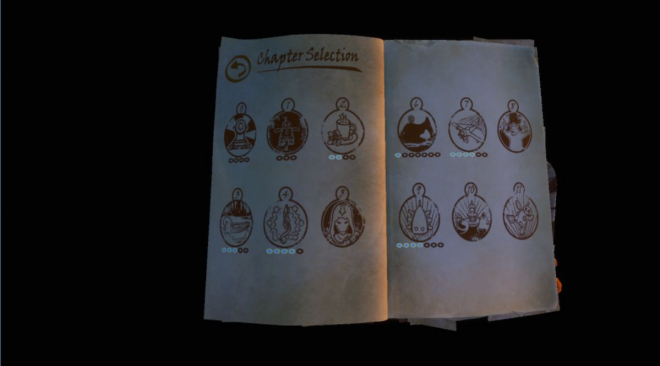 As for controls, they function well, but movement is done with the unfortunate Teleportation System. At the time of this writing, locomotion controls are in Beta and I feel they have significantly improved the quality of gameplay. There are a lot of bugs utilizing the locomotion system, but since this was an afterthought decision, I expect it to be rough until it gets officially released. The teleportation system creates massive problems with objects held, such as the Janus Knife, as teleporting at the wrong time can pretty much leave the object unusable. The throwing mechanic is rough as you swear you are throwing where you need something to be, and it will just lob a ball instead of really throwing it. Sometimes underhand tosses work better, but sometimes you toss it straight up instead of up and away from you.

You will want to use your book for hints and updates to the objectives as the game will casually mention what to do, but really not help you figure something out. The game kind of stalls on directions when you have to find a cat and build a giant “gumball machine”, as a mix of timed encounters with very slow controls can kill you as well as stare at something and wonder “what am I supposed to do?”. Just keep an eye on your book, this will update often enough that once I learned this trick it was easy to figure out what to do next. 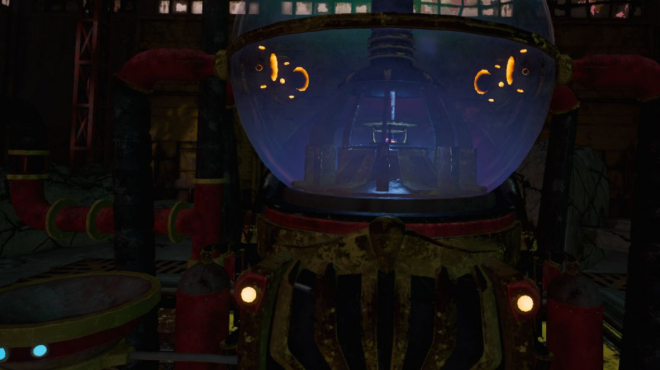 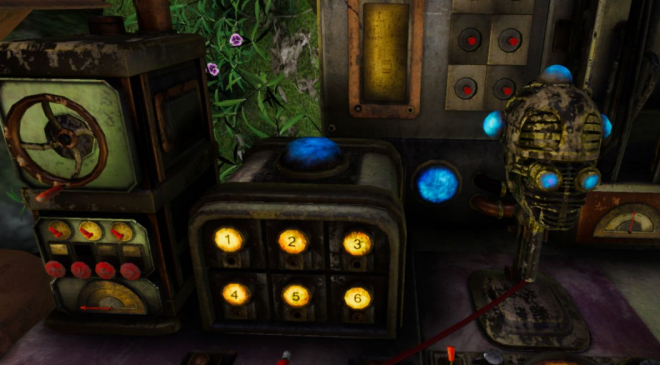 I really liked the game, I enjoyed the puzzles, and I fell in love with Scoria (I would love a DLC pack to play as and get into her backstory, prequel?). I was able to see beyond the issues I ran into as I felt like it was an enjoyable experience, and Martov Co. seem to be very active in the community and listening to feedback. There jury is out on the voice acting, especially with the annoyance of the Boka character, who we started calling Jar Jar after a while. But we also get a singing pig, and really, what more could you ask for than a singing pig? 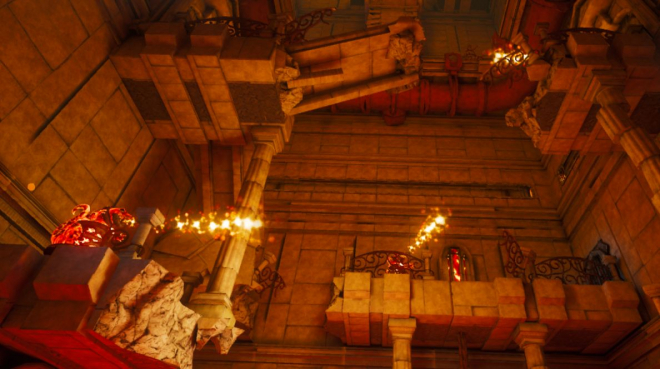 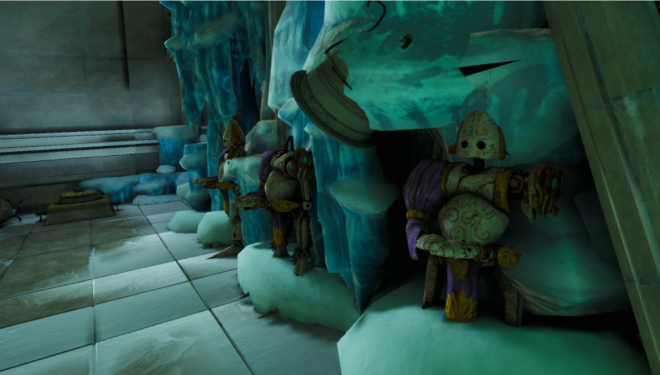 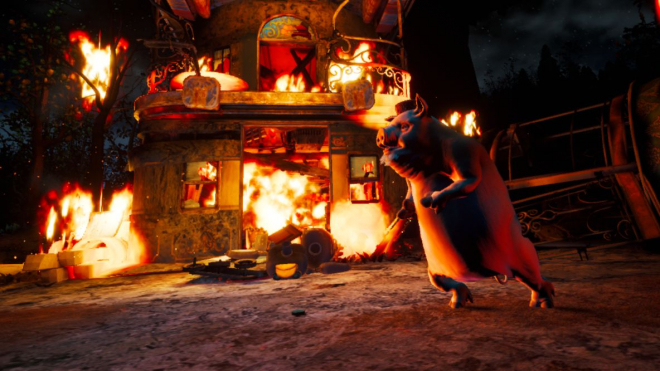 They generally do a good job, but fail significantly with throwing objects. If you have certain items in your hand and teleport jump, the held item, such as the Janus Knife are unusable.

Very stylized to the game's world and it is really well done. There are some boring flat textures here and there, but you do have some in-game options to spruce up the display.

The music gets repetitive after a while and the sounds are all there, it just fails significantly in the voice over department. Scoria and Ellary were the only ones that sounded as if real effort was put into them, the rest lack true personality and sound like a friend recording VO.

Once you beat the game, there is little reason to return to the game. There are the collectibles and Achievements that would put you back through, but there is not a new chapter/mode/character to play.

9 - Intense. This is based off playing the Beta Locomotion setting as you have full control of the character instead of the teleport system. The default setting I would rate closer to a 7 as you just stand there and warp around rooms. With locomotion on, you will get a bit dizzy spinning around as you are actually /in/ the game. This increases the quality of gameplay tenfold IMO.