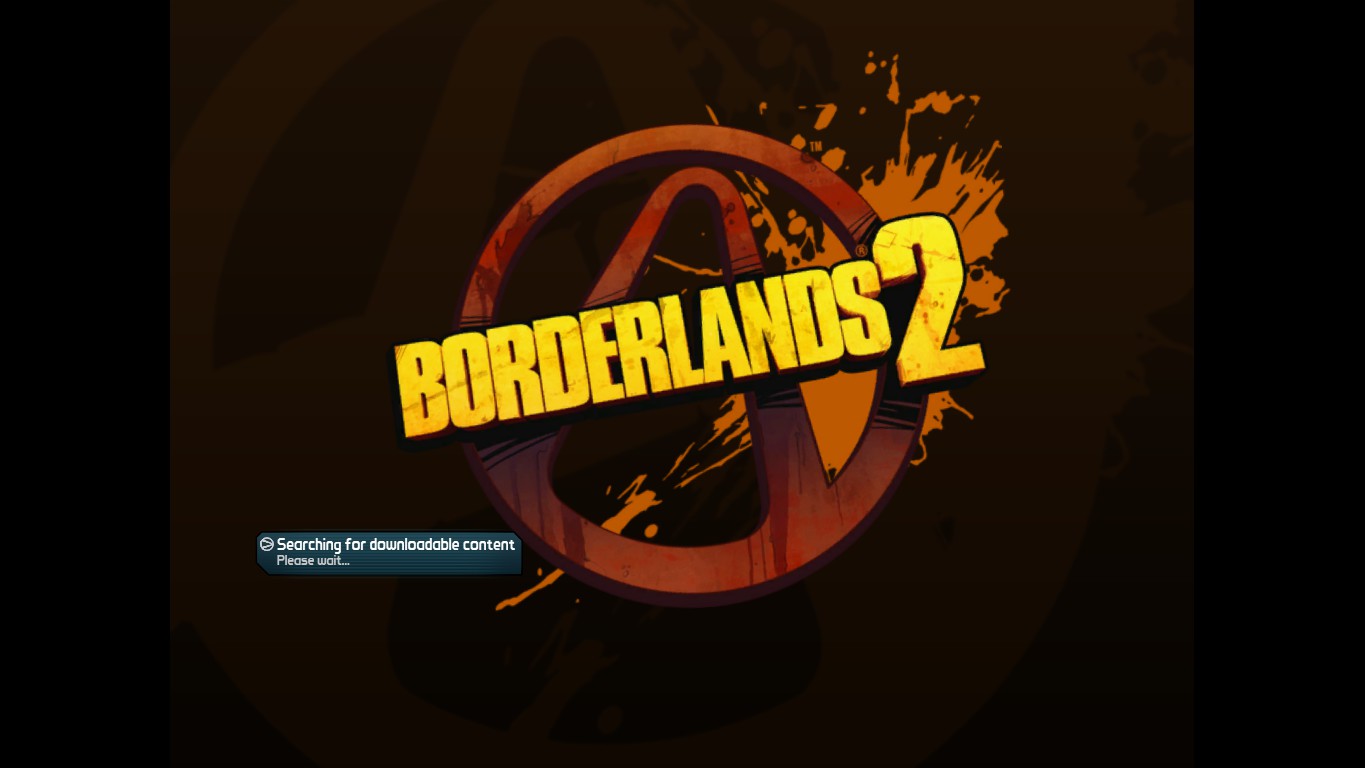 A comical shoot-em-up that is fun to play alone or with friends.

Borderlands 2 is a humorous first person shooter.   This game takes the dungeon / map clearing type game of Diablo and Torchlight with a first person shooter where you kill basically everything you see.  This game also satisfies the loot-monger side of the gamer, where you get mountains of gear, most of which will be junk.  From time to time you can find a good weapon in the midst of the junk, but the majority of the time loot will equal cash for something else.

After the end of Borderlands (the first one) people have been flocking to Pandora looking for the fabled Greater Vault.  Handsome Jack, the leader of Hyperion (one of the companies in the game) wants to find it first.  As you, a vault hunter, are traveling to learn more about Pandora, Jack sabotages the train you are in, trying to kill you.  And why not?  You're looking for the same thing he is.  During the game you will learn to hate him more than just about anything, except Claptrap.  Claptrap is the worst thing about the game, and if you don't know why, it won't take long to learn why.  After creating your character you learn the ropes of how to play, and how to get out of the frozen wasteland that Jack stranded you in.  This is where you start your bloody trail into the borderlands in search of the greater vault. 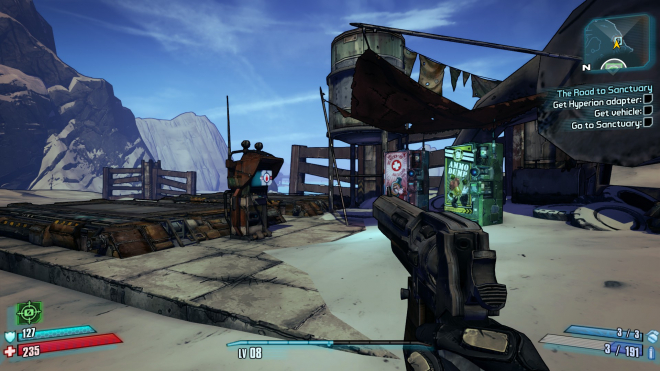 Once you choose which character you start your grindy, bloody, comical, violent path to saving the world.   The different characters have completely different play styles and skills.  There is the Siren, a woman that uses magic type powers to control the battlefield.  There's a gunzerker, a gun crazy muscular man that can create ammo as a special ability.  There's Zero, a cyber assassin that can disappear into the shadows and bait enemies to strategic positions.  Then there's the commando, which is a builder type / support guy that can deploy turrets to help protect allies or clear groups of enemies.  There are additional characters with DLC, but I won't cover them in this review.  I'll stick to base game content here.

After starting the game there is one thing that is very obvious: the extreme amount of creatures you'll kill and gear you can pick up.  Depending on your game style and character certain areas may have better guns for collecting.  One persistent issue throughout the game is inventory management.  And that's why you'll enjoy when you find the vending machines.  They can, and do, provide a good place to sell junk gear and manage your inventory.  Normally the vending machines are in safe zones at the entrance of areas, and come in pairs.  You use one to sell your gear / find new guns and the other to heal up and buy shields.  Most stuff I've seen in the machines is just junk, so I mainly used it to sell. 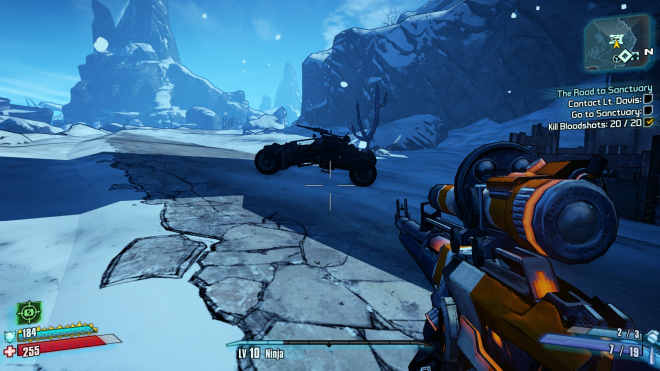 Most of the time you'll be running around by foot, but in some levels and at certain points you will be using vehicles.  As you progress into the game you'll earn new vehicles. The starting vehicle is shown above, which looks like a dune buggy with a cannon or missile launcher on the top.  Later you will get a new vehicle, which is more of a truck with an exploding barrel catapult or a burning blade launcher.  In multiplayer each player can have their own vehicle or multiple people can be in the same vehicle.  They're a nice way to get around, but sometimes can be a little difficult to control.

As you progress through the game you will normally be going from area to area killing enemies in little bases.  I found that most group of small grouping of houses where enemies hide there are normally pretty nice loot chests where some of my best gear was found.  Don't forget to loot everything you find, just in case you find your next best weapon.  But from time to time you'll find a big open area, which tends to be a boss area.  Depending on the part of the game the boss can be fighting with you to clear waves of enemies or you'll be fighting big bosses.  Boss fights can be and are difficult, as you normally have limited ammo, but the nice part of most boss fights is that they have some way to get more ammo, whether it is available in vending machines, ammo drops from other helpful characters, or the ammo dropped by enemies can keep you going.  Most times the game is very liberal with ammo and loot, so keeping on fighting isn't an issue. 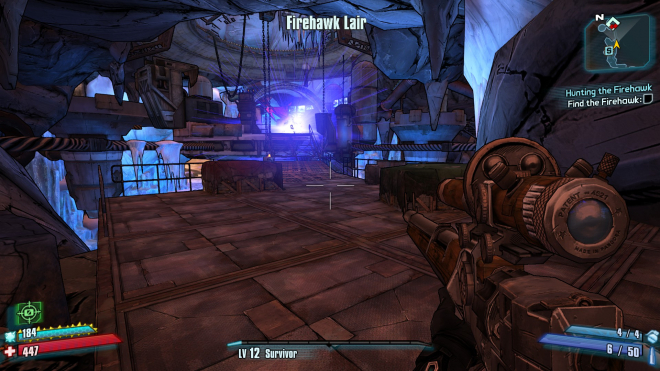 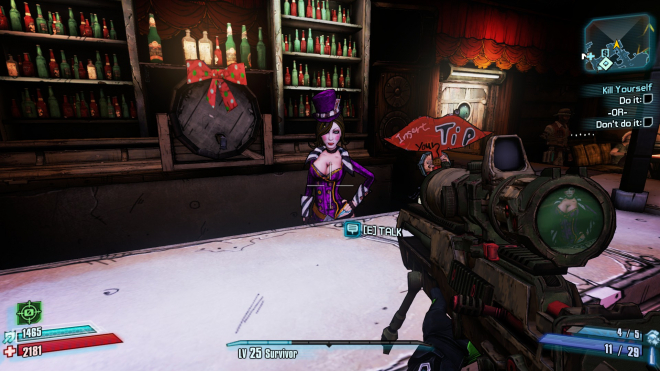 Another group of people in the game I can't forget are the NPC's and Quest Givers.  They are some of the characters that give the game the most meaning and add the most humor and depth.  Some quests are literal vendettas that the quest givers give you to get revenge for something that had happened to them earlier.  You get fetch quests (where you get something for the quest giver) or kill quests (where you have to kill something / someone).  Some quests you are asked to sabotage other people or events.  There are other quests where two quest givers send you to do the same thing, so you can choose what reward you can get at the end.  For example: in one quest a pair of quest givers were once married and are both asking you to retrieve the contents of a stolen chest.   Once you get to the chest you find pictures that the wife wants back and that the husband wants.  You can choose who they go to, as they both have their reasons for wanting the photos while offering different rewards.  There is a lot of comical banter that goes back and forth as you descend to find and retrieve the loot.  The dialogue that you get from turning in most quests is quite comical as well.  If you don't care about the quest or the rewards you can always pick the most expensive reward and sell it for cash.  Hey, it's your game, do with it as you see fit. 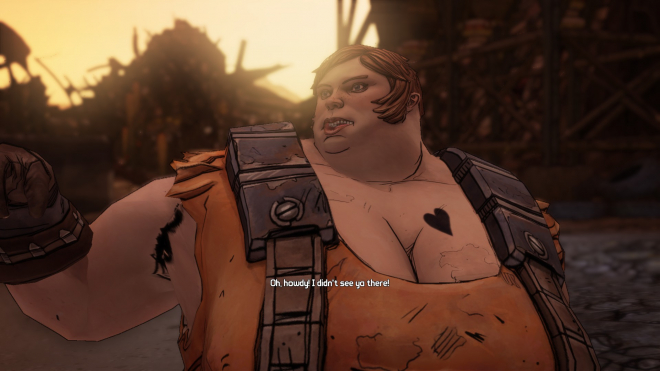 At the very beginning of the game and scattered throughout you will have cut scenes.  These mini-movies are fun to watch as they introduce certain characters or enemies.  They can vary in length, depending on the situation.  I believe that the opening cut scene is the longest, but that's to be expected, as it's setting the groundwork for the entire game.  I found it enjoyable to see more detail about characters that you will interact with, as it shows a little more about who they are and why they are the way they are.  And if you're squeamish, be wary of some clips, as they can be quite violent and gory.

Something you will spend a lot of time looking at is the loading screen.  The loading screens can be fun because they have little tips and tricks that can help you learn the game.  They give some lore details, talk about certain enemies, or can tell you about weapons and their strengths and weaknesses.  They tell of elemental boosts weapons can give and how to best use and avoid them.  Some of the information is actually geared around the areas you are traveling to so that you're more well acquainted with the area you are about to prowl.  Pay attention to the tips, as they can help determine the difference between life and death. 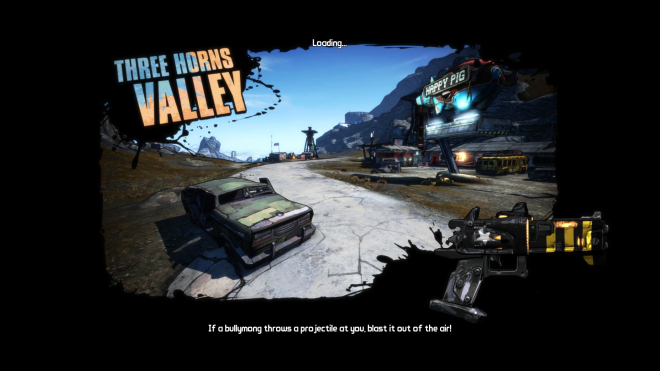 This is a good game for those that are looking for a comical first person shooter.  It does feel really repetitive at certain points, especially when all you're doing most of the time is killing subsequently more powerful enemies.  Finding better loot is a plus, though.  If you're playing the game at the pace that the game suggests then you wont be too over or under powered for the main story.  The game does scale if you play with friends because even with friends it's really easy to mow down everything in your path.  The controls can be broken or non-responsive from time to time, but it really is a minor occurrence instead of a game breaking one.  The game pokes fun at a lot of topics, even itself.  If you're playing this and feel that it's getting a little too serious or infuriating, take a break to talk to some of the NPC's in Sanctuary or listen to the crazy threats or comments made by the psychos.  If the game doesn't take itself seriously then you shouldn't either.  Oh, and if you find yourself dying too much go and do some side quests to level up / get better gear.  By the time you're back to the difficult part you'll find it's not a challenge anymore.

This game is beautiful in it's own style.  It takes a 3D cartooney look, which works well to hide some of the glitchy or mis-matched textures.  Overall the game is done well, but there are some spots that seem a little rough around the edges.  There's a lot that seems rough, so it may be intentional.

Borderlands 2 is a great game.  It pokes fun at everything without being too heavy handed while also covering some pretty heavy topics.  If you're looking for a good shooter game to satisfy your inner loot hoarder then this is the game for you.  Get this game, especially if it's on a good discount.  It's a good game to play by yourself and an even better game with friends.  Look for it during sale season, as it's a game you wont regret having in your library.

The game is easy to play once you get used to the controls.

The main story is a little shallow if you're playing it straight through, but the side quests add depth and humor to the game.

The controls are pretty easy to use if you're familiar with shooters. You can also customize the controls to be whatever you would like them to be.

The customization on this game is fantastic. You can customize almost everything, from the headwear, cloths, color, and even name. You also collect more customization as you play as loot from enemies.

This game does not take itself seriously in the least. There are many times when the game makes fun of itself. Parts of the game are serious, like when characters die and such, but it's heavy handed with the humor.